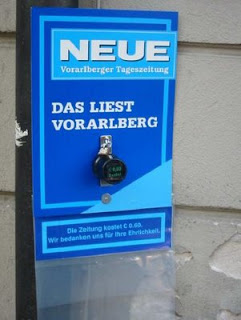 In the province of Vorarlberg, in the west of Austria, newspapers are often sold though a sales booths. It’s an honesty system – anyone can take the newspapers, but the publisher asks for a payment of 60 Eurocents.

You can see the set up in the picture. The newspapers go in the pouch are the bottom, and above it (on the black button) is a slot for you to put your money in. You’re free to give as much (or as little) as you like.

What they did was very simple. They emptied the cashbox and put one paper in the bag. Then they waited for someone to take the paper. They discretely followed that person and, when there was enough distance, they popped up and pretended to be interviewing random passers buy on “social behaviour in society”.

They also had another person open up the cashbox and see how much they’d paid (if anything). All through the process they were very careful to make sure none of the people they interviewed twigged that it was connected with their newspaper purchase. They didn’t want people to massage their views (and the publisher didn’t want his readers to think people were spying on them).

What they found was that many people don’t pay anything, and that those who do pay usually don’t cough up the full price. No surprises there! 39% paid nothing, and only 19% paid the full price. Of the people who stopped to be surveyed, the average payment among those who did pay was 26 cents – rather short of the 60 cent asking price . But what kinds of people pay up? Who are the honest Joes, and who are the thieving Toms?

It turns out that the thieving Toms are regular church goers!

Three factors had a big negative effect on the chance of paying anything at all. People who were over 50, who cheat on their taxes or who attend church regularly came in about the same. Basically, all other things being equal, regular church goers are 20% less likely to pay anything at all. 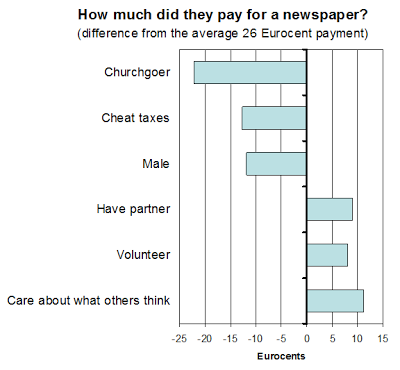 But it doesn’t end there. The amount that church goers pay was strikingly low. Among those who actually paid something, the effect of churchgoing was to reduce payout by 22 cents compared with the average. Remember that the average payment was only 26 cents, so this is a major effect.

You can see in this chart the most important factors that determined how much people would pay. Men and people who cheat on taxes are also tight fisted. Whereas people who are married or have a partner, or who volunteer or care about what others think of them, are likely to pay more.

Why are church goers so dishonest? It’s a question that seems to have stumped the two researchers. The study was done on Sunday, and they suggest that maybe church goers had donated their loose change already. But this doesn’t explain why they should feel justified in pinching a newspaper.

Perhaps we shouldn’t be too surprised. Previous research has shown that people who have a sense of their own moral righteousness are in fact more likely to cheat. This is presumably because they convince themselves that they are cheating for the greater good. So maybe these churchgoers feel that they have donated money to the church, and that this somehow justifies their their dishonesty.

But the real take home from this study is that it’s important to test what religious people do in the real world. Rather than asking them what they do, or studying them in a laboratory environment. Because if you do that, then the results can be quite surprising!