The shared genetic heritage of Jews and Palestinians

The Times recently carried this unusual report on an Israeli Jew (Tsvi Misinai, a retired computer expert) who’s hoping to prove that Palestinians are descended from Jews. Apparently, he thinks that proving this will help to stop the bloodshed. His idea is that modern Jews are descended from emigration in the first few centuries of the Christian era. The Jews who stayed put in Palestine converted to Islam, and became Palestinian Arabs. There’s hope that genetic tests might be able to prove this.

Well, there is good news and bad news on that score. 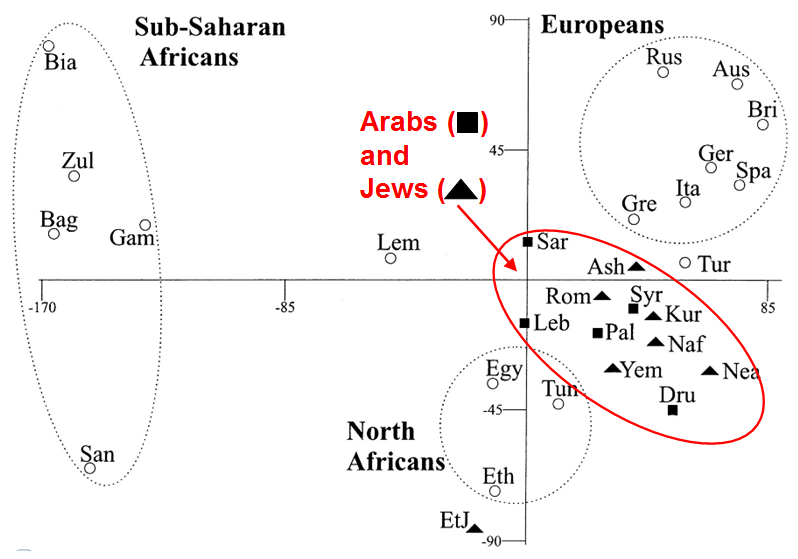 The good news is that the genetics of Arabs and Jews have been pretty extensively researched. The classic study dates to 2000, from a team lead by Michael Hammer of University of Arizona. They looked at Y-chromosome haplotypes – this is the genetic material passed from father to son down the generations.

What they revealed was that Arabs and Jews are essentially a single population, and that Palestinians are slap bang in the middle of the different Jewish populations (as shown in this figure).

Another team, lead by Almut Nebel at the Hebrew University, Jerusalem, took a closer look in 2001. They found that Jewish lineages essentially bracket Muslim Kurds, but they were also very closely related to Palestinians. In fact, what their analysis suggested was that Palestinians were identical to Jews, but with a small mix of Arab genes – what you would expect if they were originally from the same stock, but that Palestinians had mixed a little with Arab immigrants. They conclude:

We propose that the Y chromosomes in Palestinian Arabs and Bedouin represent, to a large extent, early lineages derived from the Neolithic inhabitants of the area and additional lineages from more-recent population movements. The early lineages are part of the common chromosome pool shared with Jews (Nebel et al. 2000). According to our working model, the more-recent migrations were mostly from the Arabian Peninsula…

So, as far as male lineage goes, the genetic story is very clear. Palestinians and Jews are virtually indistinguishable.

Women are a bit more tricky…
Up until last year, the matrilineal heritage of Jews also seemed pretty clear. Analysis of elements in mitochondrial DNA (which is passed from mother to daughter) seemed to show that Jewish populations around Europe, North Africa, and the Middle East were derived from at least 8 unrelated ‘founding mothers’.

Where they came from wasn’t clear, but the most likely explanation was that they were from local populations that bred with immigrant Jewish males. Their offspring became absorbed into the Jewish community.

In 2008, a more sophisticated analysis was published that made use of whole mitochondrial DNA sequences. They found no evidence for the genetic bottle necks that indicate founding mothers in the large Jewish populations. Instead, they found a complicated picture with a very diverse gene pool suggesting intermarriage both with local populations and other Jewish groups.

The overall conclusion is that the female Jewish line deviates a lot more from the Palestinian heritage than the male line, but the heritage is still there.

So that’s the good news. Jews and Palestinian Arabs are blood brothers – although this close genetic relationship probably stems from pre-Judaic times, rather than any more recent conversion of Palestinian Jews to Islam.

And the bad news? Well, this basic story has been known for the best part of a decade now. But, perhaps unsurprisingly, it hasn’t lead to the warring sides laying down their weapons and engaging in a group hug. This is a religious conflict, not a genetic one.

Mr Misinai is, sadly, on a hiding to nothing.

January 21, 2009 If your subscriber feed is broken...
Recent Comments
0 | Leave a Comment
Browse Our Archives
Related posts from Epiphenom