Why Darwin is a poster child for atheism

Madeleine Bunting, writing in The Guardian, can’t understand why atheists have the hots for Darwin:

The fear is that the anniversary will be hijacked by the New Atheism as the perfect battleground for another round of jousting over the absurdity of belief (a position that Darwin pointedly never took up). A poll for the BBC in 2006 found that less than half the British population accepted the theory of evolution as the best description for the development of life. Comparable figures in the US are attributed to its intense religiosity, but given the very low levels of regular worshippers in the UK, religious faith can’t account entirely for the resistance to Darwinian evolution. So what is it?

Well in fact Bunting has missed out a key point. Yes, many people don’t accept evolution in the UK (although data from international social surveys, rather than a BBC poll, suggest that in fact 75% of British people accept evolution [Miller, 2006]). But it’s still many more than in other countries. Comparable polls suggest that acceptance of evolution in the UK is nearly twice that of the USA (Miller, 2006 again). 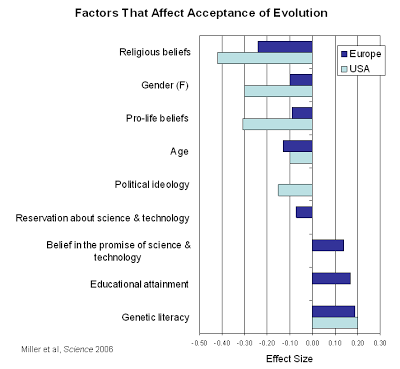 Miller’s study also analysed the factors that lead people in Europe or the USA to accept or reject evolution. And wouldn’t you know, in both places by far and away the most important factor in rejecting evolution was religion. This is after accounting for all the other factors shown in the figure here. In other words yes, even in Britain, a lot of people reject evolution. But that’s because, even in Britain, a lot of people are religious.

The effect of religion is not as big in Europe as it is in the USA. And that’s because people who have religion in the USA are typically more conservative (read: fundamentalist) than in Europe. Miller concludes:

…individuals who hold a strong belief in a personal God and who pray frequently were significantly less likely to view evolution as probably or definitely true than adults with less conservative religious views.

So not only does religion stop you from accepting evolution, but the stronger your religion the worse the effect.

Perhaps this is just coincidence. We know that religious people are, on average, more poorly educated and of (slightly) lower IQ than atheists – especially in the USA. Perhaps religious people just don’t accept science? Well no, it turns out that that doesn’t really explain it either.

In 2008 Tania Lombrozo and colleagues (University of California) quizzed 96 undergraduates (mostly psychology undergrads) about their attitudes to science and evolution. What they showed was that understanding of the nature of science was indeed very important for accepting evolution. But they also found that religion was just as important.

Now, in this admittedly rarified group they found no meaningful relationship between religious belief and understanding of science. So what this shows is that religion is directly and significantly reducing acceptance of evolution, even in people who understand science and would otherwise accept it.

Rejection of Darwinian evolution is a stark example of how religion can cause people to deny truths about the world around us. And that, Madeleine Bunting, is why Darwin has become a poster child of the atheist movement.

But perhaps this is all a misunderstanding. Perhaps there isn’t really a conflict between religion and Darwinism? Bunting doesn’t think so:

Many of the prominent voices in the New Atheism are lined up to reassert that it is simply impossible to believe in God and accept Darwin’s theory of evolution; Richard Dawkins and the US philosopher Daniel Dennett are among those due to appear in Darwin200 events. It’s a position that infuriates many scientists, not to mention philosophers and theologians.

And yet it’s a rather extraordinary coincidence? Religious people don’t deny fluid dynamics, for instance. Perhaps there is something about evolution that is, at heart, difficult for the religious to stomach. And I don’t mean just the idea that god didn’t create people using magic. I mean about what evolution tells us about what kind of god could exist.

Despite Bunting’s assertions, theologians at least are aware of the problem. Amy Frykholm, writing the The Christian Century, explains the problem:

… knowledge of evolutionary history raises questions of theodicy in an especially disconcerting way. Evolution reveals a vast history of unfathomable waste, loss, extinction, suffering and death in the natural world. What has God been up to all these millennia? And what is God up to now? If we believe that God oversees creation, then God’s way of doing it through evolution seems strange and even appalling.

Frykholm goes on to explain the modifications to their ideas about god that theologians have made in order to reconcile them with evolution. In other words, in order to accept evolution you have to reinvent god. For many people, that’s a step they find hard to swallow. For many, acceptance of evolution is the first step on the path to atheism (and humanism).