New ARIS survey will show that US atheists/agnostics have nearly doubled since 2001 February 28, 2009 Epiphenom

The next wave of the American Religious Identification Survey (ARIS)will be released on March 9 2009 – but we’ve got a sneak preview of the non-religious data! ARIS is the most comprehensive and reliable survey of religion in the USA (surveying 50,000 people), and two sets of data have been published so far – from 1991 and 2001. The ARIS team last repeated the survey in 2008 and have been crunching the data since – the report will be available here in just over a week.

The data are going to be very interesting – the 2001 survey was a bombshell because it revealed just how many Americans are switching off religion. What will the 2008 data show? Well, if you drill down at the Institute for the Study of Secularism in Society there’s a presentation with a few of the key numbers. So here’s a sneaky peek at them!

Trends are what’s important – is America becoming more secular? Comparing the numbers with 1991 and 2001 reveals all…

In 1991, There were 14 million who did not count themselves as belonging to any religion. By 2001, that had mushroomed to 29 million. The past seven years has seen another 3 million abandon religious identity (or, alternatively, 3 million religious elderly pass away, and 3 million secular youth replace them in the statistics). A small gain. 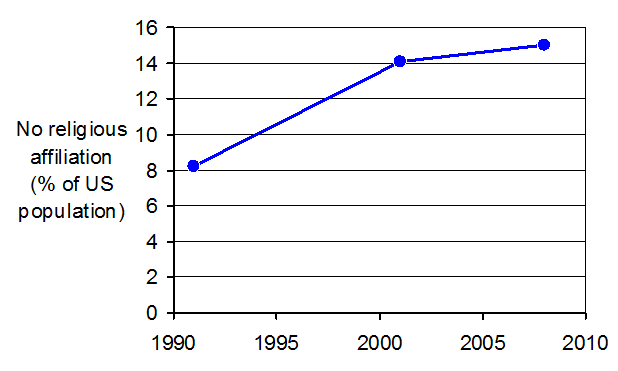 The US population has also grown over that time, but the % figures still show a similar story. Huge growth in the 1990s, followed by a smaller growth afterwards.

Having no religion is not the same as being a non-believer. A common claim is that, although the number of people without a religious identity is increasing, this does not reflect an increase in atheism or agnosticism. Instead, these people without religion are just dissatisfied with the current offerings, and so are going their own way. In 2002 Hout and Fischer, using data from the General Social Survey (which stretches back over decades), concluded that:

Religious skepticism proved to be an unlikely explanation [of the increase in non-religious]. Most people with no preference hold conventional religious beliefs, despite their alienation from organized religion. In fact, these “unchurched believers” made up most of the increase in the ‘no religion’ preferences.

The new data from ARIS show a different story since 2002. Take a look at the number of self-declared atheists and agnostics (I’m adding in to this group the small number of people who call themselves humanists). These went from 1.2 million in 1991 to 1.9 million in 2001, and then shot up to 3.5 million in 2008. Although there’s only been a small growth in the numbers of people with ‘no religion’, there’s been a doubling of people prepared to admit to an interviewer that they are atheist or agnostic. 3 million new non-religious, but 1.6 million new atheists/agnostics. 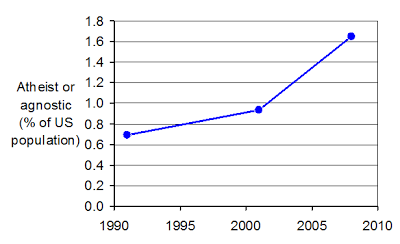 The graph shows these numbers in percentage terms. It’s a striking picture, especially when compared with the changing numbers of ‘non-religious’.

In the 2001 ARIS survey, only one in five people who disagreed strongly or somewhat that “God exists” were prepared to call themselves either atheist or agnostic. We won’t have those data for 2008 until the final report is published in just over a week. But I suspect that the nonbelievers are coming out of the closet. It seems that perhaps the Out Campaign might be having some effect. Atheism is finally starting to become socially acceptable in the USA.

March 1, 2009 Gregory S Paul skewers Baylor study claiming Americans are just as religious as ever
Recent Comments
0 | Leave a Comment
Browse Our Archives
get the latest from
Nonreligious
Sign up for our newsletter
POPULAR AT PATHEOS Nonreligious
1