“God does not exist.” Error: does not compute!

Michael Persinger is a behavioural scientist at Laurentian University in Canada who is most famous for studies where he uses transcranial magnetic stimulation to induces feelings of God in ordinary people (even, on one occasion, Richard Dawkins!Edit: although he tried, Dawkins was impervious to his electromagnetic charms – watch the video to see more).

Persinger thinks that we’re hardwired to believe in God, and his latest research on this has just been published. His experiment was rooted in the theory that parts of your right-brain are involved in detecting potential upsets in a logical chain of thought, before passing this information over to decision-making parts of your left hemisphere.

If the right hemisphere is more specialized for vigilance and affect than the homologous regions of the left hemisphere, then one would expect specific activation by the emotional meaning or implications of statements that challenge personal beliefs, particularly those (such as belief in God) that have maintained reduction of anxiety about the dissolution of the self (death).

So how to test this theory? Well, Persinger put his subjects through a ‘dichotic word listening task’. Essentially, this involves playing different words to your left and right ear at the same time. The number of words played in your left ear that you get right reflects the speed at which information is transferred from left to right brain. 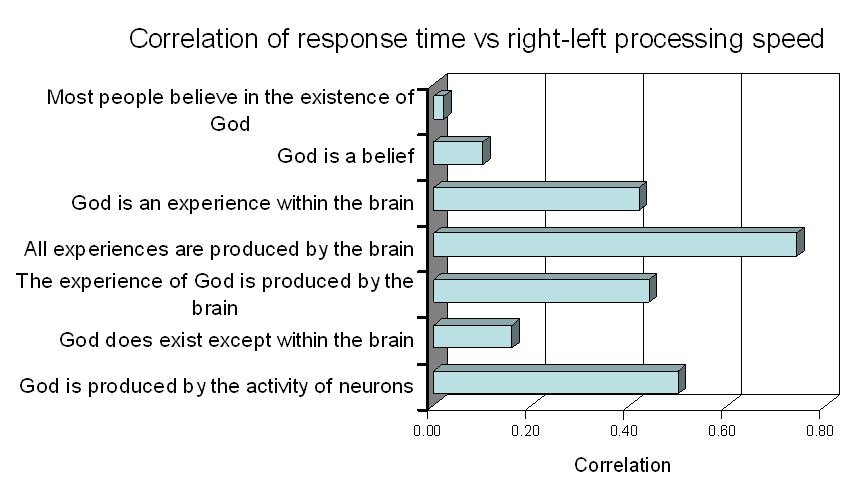 Then he ran them through a long chain of logical statements, beginning with ‘The universe contains matter” and ending with ‘Matter is composed of atoms’. Towards the end of a chain were a series of statements about the non-existence of god. I’ve put the results of these ones in the figure.

The correlation between the slowness of information transmission between the hemispheres and the speed with which people answered the questions got higher as they got onto the God questions.

In other words, a large part of why some people took so long to think about these questions seems to be to do with emotional processing of the content. It upset their gut feelings.

Persinger thinks that this demonstrates that we’re hard-wired to reject statements about the non-existence of God. I’m not so sure.

The main problem is that there weren’t any controls. It may well be the case that you’d get the same results with any statements that challenges your preconceptions – even if those were cultural preconceptions, rather than innate.

And secondly, I think that a lot of believers would argue that the chain of statements is inherently illogical. I mean, they sound logical but I don’t think that each necessarily implies the next. The results Persinger got may simply come from the fact that his ‘logical chain’ doesn’t actually make logical sense!

Still, even with these caveats, it’s clear evidence that when people reject the claim that “there is no God”, their reasoning involves a large emotional component. And that alone makes this is an interesting study!