Why do atheists have fewer kids?

Why do atheists have fewer kids? September 21, 2009 Epiphenom

Here’s something interesting from the papers last week. First we’ve got the philosopher Julian Baggini, an atheist, arguing in The Guardian for the virtues of a childless life. Then, in response, Ed West writes in The Telegraph arguing that atheism is facing a kind of demographic implosion, as the religious inexorably overwhelm them in in the fertility arms race.

Now, this isn’t a new argument, but there’s precious little research into it. About the only sociologist brave enough to attempt a quantitative prediction is Eric Kaufmann – I blogged about his latest analysis back in June.

But it does give me a handy hook to talk about a chapter in the recent book The Biological Evolution of Religious Mind and Behaviour by Michael Blume – who’s done a number of studies into the function of religion from an evolutionary perspective. 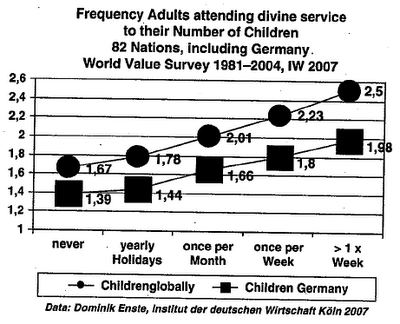 First off, some basic stats to give you a feel for what we’re talking about here. These are averages across all nations in the World Values Survey, showing the tight light between fertility and religious service attendance.

So is this simply because religions are associated with traditional values? Or maybe that the religious are lower socio-economic status.

It doesn’t seem to be so. Blume zooms in to Switzerland, and the data from the census in 2002. Those Jewish and Christian sects that have a higher proportion of the wealthy and educated are actually more fertile than the others.

What’s more, traditional sects seem to have lower fertility than the new ones, like Jehova’s Witnesses and the New Apostolic Church.

It seems, then, that there is a direct effect of religion on fertility. The question is why that might be so.

From an evolutionary standpoint, it’s clear that any trait that increases reproductive success will become more common in the gene pool. Assuming that the demographics we see in the modern translate into the modern world, those genes that favour religion would be more successful.

It’s not at all clear to me that we can extrapolate back like that. After all, there’s a lot more to reproductive success than churning out children. And modern people have retained a capacity for atheism, which suggests some competing reproductive benefit.

Still, it’s worth considering why religion is linked to higher fertility. And it’s here that Blume’s arguments get really interesting. He suggests that a key factor is honest signalling.

This is the idea that people pay a visible price to get membership of a group, in order to prove that they are committed to the group. The classic example is initiation rites in gang membership.

How does that apply to religion? Well, religions impose a number of obligations on their member – service attendance, food and dress codes, for example. The idea is that these obligations deter those who are not ‘true’ believers.

There are a number of issues with honest signalling theory as it applies to religion – the jury is still out in the matter (personally, I’m sceptical). But Blume does provide one tantalising piece of evidence.

And that’s gender ratios in religious membership. Specifically, the heavy preponderance of women in religious groups, followed next by married men.

The idea is that women have a lot to lose by hooking up with an unfaithful guy. But a male who has made a commitment to the group is sending a signal that he values the group ideals sufficiently to invest the time and effort in going to Church (or whatever). With a bit of luck, that means he’s not going to run off with the next available female that crosses his path.

If you want to read that essay yourself, you can download it from Blume’s webpage here. It’s worth it for the fascinating anecdotes about Darwin and the splendid Faust reference!