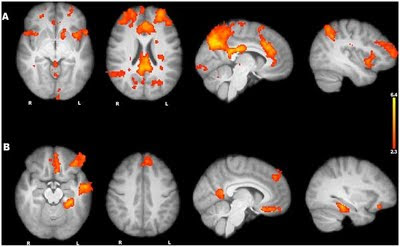 Sam Harris, author of The End of Faith, has just published a second brain imaging study of religious belief.

Harris and his colleagues were interested in two questions. Firstly, how does the brain process ideas of ‘belief’ and ‘disbelief’ – and does it differ when you are talking about religious beliefs or other kinds of beliefs.

The difference between the two is what shows up in the orange in the picture on the right. Those are the bits of the brain that are more active in one mental state relative to the other.

What matters is whether you, personally, believe it to be true or false. In other words, there does seem to be anything special about religion here. A believer will evaluate a religious claim that “The God of the Bible is literally true” in the same way that non-believer will evaluate the statement “The biblical god is a myth”. And they will both evaluate these in the same way as the statement “Santa Claus does not exist”.

But where the study did find a difference was for religious claims in general (whether or not they were believed to be true). That’s what the image at the top of this post shows. It’s the parts of the brains that light up when processing a religious claim, compared with a non-religious claim.

So what does this prove? Well, part of the problem with these kinds of studies is that it doesn’t show much. The brain’s a complex, poorly understood organ, and each bit of the brain has been linked to several different functions.

With that caveat, Harris reckons that evaluation of religious statements seem to be linked to emotions of disgust and pain:

The contrast of religious stimuli minus nonreligious stimuli (see Fig. 2A, Table 3.) revealed greater signal in many regions, including the anterior insula and the ventral striatum. The anterior insula has been regularly linked to pain perception [34] and even to the perception of pain in others [35]. This region is also widely believed to mediate negatively valenced feelings like disgust [36], [37].

On the other hand, non-religious statements are linked to regions of the brain connected with memory and semantic evaluation:

The opposite contrast, nonreligious minus religious statements, produced greater signal in left hemisphere networks, including the hippocampus, the parahippocampal gyrus, middle temporal gyrus, temporal pole, and retrosplenial cortex (see Fig. 2B, Table 4). It is well known that the hippocampus and the parahippocampal gyrus are involved in memory retrieval [42]. The anterior temporal lobe is also engaged by semantic memory tasks [43]

And a last little titbit. There was also a difference in how quickly the subjects evaluated the statements. The quickest response times were for the non-believers when evaluating religious claims they agreed with (i.e. “The biblical god is a myth”). In general, it’s quicker to evaluate a ‘true’ statement than a false one. Could it be that ‘Religion is false’ is more true for nonbelievers that ‘Religion is true’ is for believers?

October 1, 2009
How to spot them in the wild: visual characteristics of religious v nonreligious
Next Post