How to spot them in the wild: visual characteristics of religious v nonreligious

How to spot them in the wild: visual characteristics of religious v nonreligious October 1, 2009 Epiphenom

There was a study in the New Scientist earlier this year linking what people look like with their personality (I blogged it a few weeks ago). It turned out that it was possible to spot the religious women in the sample from their faces alone.

Now interpreting this was a little tricky, because the non-religious ‘typical face’ was smiling, and the religious one wasn’t. Which suggests that, in the UK at least, you can spot religious people because they don’t smile.

But here’s a new study, from the US this time, that gives a radically different slant. Laura Naumann (UCB) and colleagues got a group of students and took whole-body (clothed!) photographs, first unposed and then after asking hem to stand in a standard pose.

The also asked them whether they were religious, and their political orientation.

Then they asked a second group of students to assess the subjects personality based on photos alone. Basically, individuals are pretty poor at judging personality. In the standardized pose, they were just about able to pick up on extraversion. In the unstandardized pose, there was a hint towards being able to spot the religious.

Things got better when the researchers took a ‘wisdom of crowds’ approach. This uses a kind of democratic approach, averaging the individual estimates to see what the consensus opinion is. The crowd was able to pick out a religious person just over 60% of the time (you’d expect 50% by chance alone). It was a little bit easier to spot them in the unposed photos, but not much (62% vs 64% – small, but statistically significant).

So, it seems that there is something about how the religious people looked that enabled the raters to pick them out. So the question is, what was that?

Well, the researchers marked all the photos according to several criteria, and rated these against personality. On average, the religious people were more likely to be energetic, relaxed and, importantly, smiling.

Yes, that’s right, in this sample of US students, you can pick out the religious because they’re smiling. In the UK sample (of New Scientist readers) they were less likely to be smiling.

What’s happening here? It could be an age effect, or it could be the different social status of religion in the USA and the UK. To be part of the mainstream in the USA means to be religious, whereas the opposite applies in the UK (for most people in the UK, religion is unimportant, even if they aren’t exactly atheists).

In the US, unlike the UK, being non-religious is linked to social exclusion. 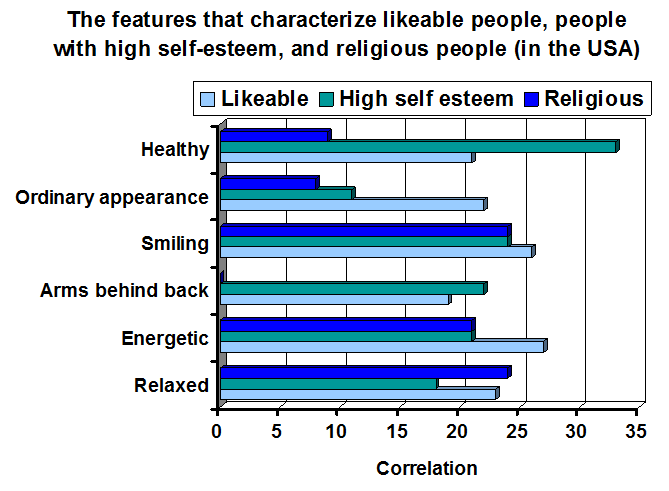 It’s interesting to compare the characteristics of religious people in the sample with popular people. They’re pretty similar. You can see from the graph that, like religious people, people with high self-esteem or who are likeable are more likely to smile and to look energetic and relaxed.

Unlike popular people, though, religious people aren’t more likely to look healthy, ordinary, or stand with their arms behind their backs. I’m not too sure what to make of these differences!

Here’s another interesting nugget from the study. The first graph show the actual, objective characteristics that are linked to religion and other traits. But their data also let them assess the extent to which their raters used these characteristics as cues.

In other words they could compare what their observers thought characterized religious people, with what actually did. The results are shown in the second graph. 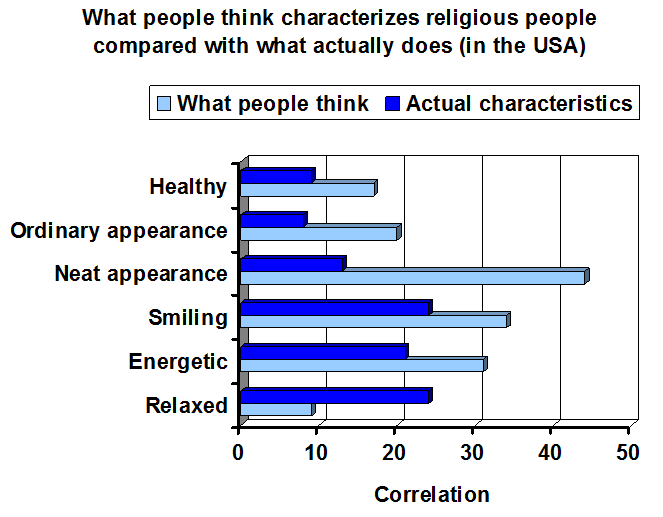 The first thing to note is that the ‘What people think’ bar tends to be longer than the ‘Actual’ bar. What this means is that people think it’s easier to spot religious people than it actually is.

The curious thing is that the raters didn’t expect religious people to look relaxed. Whereas, in fact, looking relaxed was a key attribute of the religious.

So there you have it. They expected religious people to be neat, but in fact they were relaxed! Why should this be? I suspect it’s simply because the raters didn’t realise that, in their community, religious people are simply the popular people. 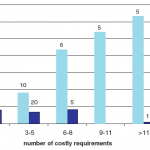 September 29, 2009
Why religious communes succeed and secular ones fail
Next Post

October 5, 2009 Brain patterns of belief
Recent Comments
0 | Leave a Comment
Browse Our Archives
get the latest from
Nonreligious
Sign up for our newsletter
POPULAR AT PATHEOS Nonreligious
1