Live long and be atheist

The splendid World Happiness Database has released a new analysis of their 2009 data. Basically what they’ve done is to multiply happiness scores in each nation with the life expectancy. The idea is that what most people want is a life that’s both long and happy.

Costa Rica came out top, followed by the usual gaggle of Northern European Countries (and Canada).

Now, there’s an ‘ecological’ problem in this analysis, in that the people with long lives in a nation aren’t necessarily the happiest. What’s more, happiness might be very unevenly distributed in some countries.

And being grumpy might have its plus side – in the news yesterday was an Australian study which claimed that grumpy people are less prone to errors of judgement! 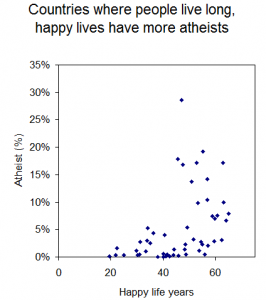 Be that as it may, whenever these national statistics come out I always like to correlate them against religion, to see how they stack up. So here’s the results for this one.

What I’ve done is plot the percentage of hard-core non-believers in each country against the ‘happy-life-years’.

There is a weak, but statistically significant relationship – especially with the unimportance of religion. What’s more, the correlation is about 50% stronger than with happiness alone.

The fact that this does not happen suggests a negative interaction. What may be happening is that some countries with short life expectancy are particularly religious. That makes them happier than you would expect, and confounds the straightforward link between long life expectancy, happiness and atheism.

November 1, 2009
Is ritual purification brain down to a brain short circuit?
Next Post

November 8, 2009 Income inequality drives church attendance
Recent Comments
0 | Leave a Comment
Browse Our Archives
get the latest from
Nonreligious
Sign up for our newsletter
POPULAR AT PATHEOS Nonreligious
1