What you want, god wants

Religious people tend to think that they know what their god wants, but how do they come by that knowledge? For me, as an atheist, it’s a fascinating question. The gods can’t be communicating their preferences directly (because there’s no such thing), so where do these beliefs come from?

One obvious source is the various holy books. However, even if you restrict yourself to adherents of a single religion, there are vast differences in beliefs about god’s opinions (and that’s just looking around the world today – when you extend the comparisons back in time the disagreements between believers become even more dramatic).

All this suggests that people must be projecting their own beliefs and opinions onto their god. A bundle of new studies from Nicholas Epley, at the University of Chicago, suggests that that is exactly what happens.

What he and his colleagues did was to subtly manipulate people’s own opinions, and see if that affected their ideas about what God’s opinions were. 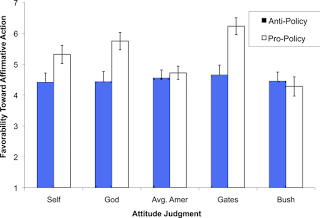 This had the desired effect on the subjects own opinions. Whether they were pro- or anti affirmative action was influenced by which arguments they read.

Then he asked them about what the average American thought about the topic, and also what George Bush thought. As you can see in the graph, this didn’t change regardless of how their own beliefs have been manipulated.

Their beliefs about what god thought did change, however. In fact, the correlation between their own opinions and those they attributed to God was very strong.

Now, what’s interesting is that their beliefs about Bill Gates’ opinions also mirrored their own. The thing about Bill Gates is that he’s generally admired, but nobody really knows what his opinion is on this topic. So they were free to invent it.

They did another, somewhat more sophisticated experiment that showed something similar. Basically, if you change people’s attitudes to the death penalty, then that changes whether they think God is pro- or anti-death penalty.

This is all good stuff. But it gets really interesting when you look at some of the brain scans they did. In these scans, they asked subjects to think about attitudes to euthanasia. First, their own attitude. Then the average American’s attitude. And finally God’s attitude.

Looking next the brain image, which shows thinking about God’s opinions compared with the average American’s. Again, some differences. According to this brain, God does not think the same as an average American.

This is a fascinating result. It suggests that people use God not to inform their own decision making, but to reinforce it. Here’s what the study’s authors conclude:

People may use religious agents as a moral compass, forming impressions and making decisions based on what they presume God as the ultimate moral authority would believe or want. The central feature of a compass, however, is that it points north no matter what direction a person is facing. This research suggests that, unlike an actual compass, inferences about God’s beliefs may instead point people further in whatever direction they are already facing.

Now, this doesn’t show that religion has no influence on attitudes and opinions. Other research has shown that it does. But it does show is that people can and do reinvent their god to suit their own beliefs.

Epley N, Converse BA, Delbosc A, Monteleone GA, & Cacioppo JT (2009). Believers’ estimates of God’s beliefs are more egocentric than estimates of other people’s beliefs. Proceedings of the National Academy of Sciences of the United States of America PMID: 19955414

December 4, 2009
Someone to blame when disaster strikes
Next Post