Atonement is a funny concept. Essentially, it’s the idea that you can cancel out a wrongdoing not by doing a good deed, but by engaging in some act of self-punishment.

Although the classic example comes from Christianity (the tortured death of Jesus) similar concepts of penance are widespread in other religions. Penance goes beyond the more normal concepts of justice (revenge and punishment) because it’s voluntary.

Perhaps there’s more going on here than meets the eye. Rob Nelissen and Marcel Zeelenberg at Tilburg University in The Netherlands speculate that people might indulge in self-punishment because it makes them feel better.

They set out to test whether people self-punish when they are made to feel guilty, but only if they can’t make good the wrong doing directly.

The basic idea was that subjects had to perform a test that they were told was a measure of how hard they concentrated. As usual it was no such thing – whether the subjects succeeded or failed was entirely manipulated by the investigators (why do the subjects fall for this every time, I wonder!).

They were paired up in this game with another player (OK, so the player was fictitious too, just there to help manipulate their guilt).

Basically the deal was that some of the subjects were made to feel that they had underperformed on the second round of the game, so that they had let the other player down.

In the third round, they were given the opportunity to self punish. Instead of just receiving points for correct answers (as in the previous rounds), now they would get points taken away for wrong ones. 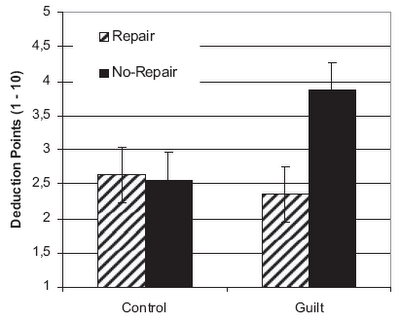 The graph sums up the results nicely. In the control condition, there was no guilt and the level of self-punishment and partner punishment were similarly low.

In the guilty condition, there was no change in the partner punishment. But there was a large increase in self-punishment.

It seems likely that this self punishment only takes place when there is no opportunity to right the wrong. In another experiment, they asked people to envisage a variety of scenarios about borrowing money for college from their parents, and then goofing off. They were then given some options on what to do next.

Some students were presented with the scenario where they had no opportunity to make up for their wrongdoing by working harder. These students were more likely to choose the self-punishment course (denying themselves the pleasure of a skiing trip).

So, there you go. Do the religious ideas of penance and atonement result from a subliminal need to self-punish? And, if they do, what could possibly be the function of it (from a biological/evolutionary perspective)?

January 9, 2010 Get religion and get laid
Recent Comments
0 | Leave a Comment
Browse Our Archives
Related posts from Epiphenom