Get religion and get laid

Humans adapt their mating strategies according to what they think their chances are. For example, when there are more men than women, people marry earlier and divorce less. When there are more women, the opposite applies. The supposition is that this this is because, when women are in a ‘buyers market’ they are more able to demand fidelity.

What’s more, when women are shown an array of attractive, promiscuous women, they’re more likely to reject the notion that casual sex is OK.

How does religion fit into this? Douglas Kenrick (Arizona State University), who’s an expert on human mating strategies, has set out to investigate this.

Now, to me that doesn’t really make sense. You would expect women in a competitive marketplace to want other people (especially men) to be more religious – but not themselves. If women are in a position to demand fidelity, then men would respond by claiming to be religious (in an attempt to persuade women that they are a good, faithful ‘catch’). But if men were in demand, then they could demand less ‘religiously virtuous’ relationships. 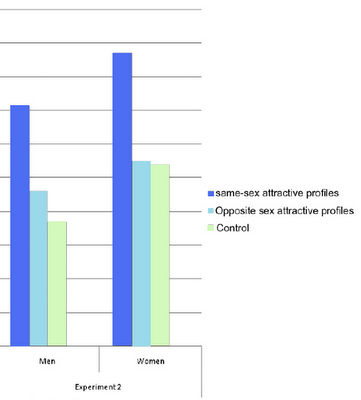 But that’s really a moot point, because Kenrick didn’t find what he expected to.

What he did was to show students pictures of 6 attractive men or six attractive women (the ruse was that they were helping improve a fictional dating service). He then asked them about their religiosity.

So, when you remind people of the competition, they get to thinking that the mating odds are stacked against them. And they respond (at least, these US students respond) by claiming to be more religious.

It’s a puzzling result if you start from the assumption that people assert their religiosity in order to advertise their secular fidelity. Why on earth should women claim to be religious, when that might make them less attractive to potential mates?

So if these responses aren’t about advertising fidelity, what can explain them? I think it’s simple. In the USA, religion is a social norm. Atheists are outsiders. So, if you want to make yourself look attractive, then you claim to be religious.

Indeed, there’s some great evidence that that’s exactly what happens – which is the topic of the next blog post.

January 12, 2010 Religion makes you desirable... in the USA but not in Britain
Recent Comments
0 | Leave a Comment
Browse Our Archives
Related posts from Epiphenom