Religion makes you desirable… in the USA but not in Britain

Religion makes you desirable… in the USA but not in Britain January 12, 2010 Epiphenom

The previous post took a look at some recent research on how competition for mates affects how religious people say they are. When a group of students in the US were subtly reminded that there’s a lot of competition for potential mates, they responded by claiming to be more religious. One potential explanation for this is simply that being religious is seen as socially desirable.

If this were true, then you would expect that people who are inclined to ‘self enhance’ (i.e. paint a rather flattering portrait of themselves) are also more likely to say that they are religious. There have been a huge number of studies looking at this over the years (57 studies, in fact, totalling over 15,000 subjects), and Constantine Sedikides (at Southampton University in the UK) has just compiled the results into a mega-study.

Overall, image manipulation, but not self-deception, was correlated with religion. 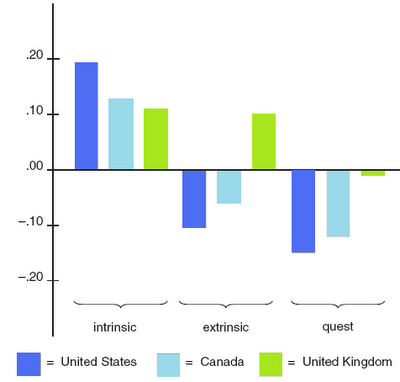 A fascinating result, but it becomes even more interesting when you break it down at the national level. As you can see from the graph, the strongest effect of religion is in the USA.

In Canada and the UK, the link between intrinsic religion and self-enhancement is smaller.

Sedikides speculates that this is down to the different role of religion in the USA compared with Canada and – especially – the UK.

In the USA, most people are religious and it’s common for people to frown upon those who are only religious for what could be seen as superficial reasons. Self-enhancers respond by saying that they are intrinsic believers, but that they are not extrinsically religious. (Compare this with the study last year that showed people in the US believe the religious to be healthier, happier, and more normal than they actually are)

In the UK, religion is a minority pursuit, and subject to ridicule. Self-enhancers respond by saying that they don’t really take the beliefs too seriously, but they are in it for the community and social side.

Now, if you’ve read this far you are probably wondering why all this talk of cause and effect, given that all the data are correlational? Well, Sedikides has an answer. He points out that it’s well known that people use a wide variety of means to satisfy their self-enhancement motives – so you would expect them to use religion as well. What’s more, self-enhancement is a very basic psychological structure, whereas religion is primarily a cultural adaptation.

January 15, 2010 Anonymous? We just can't get our head round the idea
Recent Comments
0 | Leave a Comment
Browse Our Archives
get the latest from
Nonreligious
Sign up for our newsletter
POPULAR AT PATHEOS Nonreligious
1