The brain surgery path to transcendence 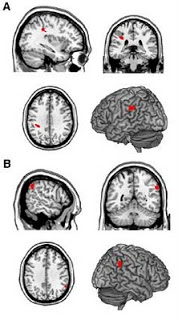 Transcendence: the belief that you are connected in ineffable ways to the world around you, that you are not limited by your body but can go beyond it in mysterious ways.

The feeling of transcendence seems to be linked to the right parietal lobe. Brain scans of meditating Buddhist monks show decreased activity in this area, and people with brain damage in the region report feeling more spiritual.

Now a new study has taken a closer look in patients undergoing surgery for brain tumours. Using a sensitive measure of spirituality and accurate mapping of the brain lesion, they were able to tie down the relationships to two specific brain regions, shown in the image.

One of these is located in the right parietal lobe, and the other in the left parietal lobe. These parts of the brain are linked to awareness of where your body (and body parts) is in space.

So these results support the idea the transcendental experiences are caused by a loss of function in these key brain areas. What’s interesting was the effect was both immediate (it happened straight after surgery) and prolonged (it was detectable in patients who had previously been operated on for a tumour in the same area).

And feeling more transcendental seemed to turn them on to religion. Patients whose brain tumours were located in this area reported being more religious even before surgery. So if somebody you know suddenly takes up churchgoing, you might want to refer them to your friendly, local neurologist!

February 8, 2010
Be religious and be free (or at least, let off with a lighter sentence)
Next Post

February 15, 2010 Religion makes you a fat non-smoker
Recent Comments
0 | Leave a Comment
Browse Our Archives
get the latest from
Nonreligious
Sign up for our newsletter
POPULAR AT PATHEOS Nonreligious
1