Religion makes you a fat non-smoker

You might have seen news reports about a recent study showing that religious people are no healthier than non-religious. The cynical among you might be wondering what on Earth’s going on here, given that other studies have shown the opposite! A classic example of scientists proving whatever they want to, perhaps?

Well, no. There’s a good reason that this study has found something different, and that’s because it’s not asking quite the same question.

You see, working out the relationship between religion and health is actually quite complicated. If you take the straightforward approach the answer is clear: religious people are unhealthier and die younger than the non-religious.

The reason for that is obvious. Religious people tend to be poorer and less well educated. As a result, most studies try to work out whether religious people are healthier after adjusting for these differences.

So the key question boils down to this: which differences should you adjust for? Your decision on this will affect the answer you get.

Most studies adjust for basic demographic factors. Older people and women are more likely to be religious, and both these affect your chances of heart attacks. Most studies also adjust for education and income level.

But there are also a host of lifestyle factors that make heart disease more likely (smoking, lack of exercise, overeating). Here’s where it starts to get more difficult, because religion could definitely cause you to be a nonsmoker.

Many studies adjust for these lifestyle factors. But you can go a step further – and that’s what they did in this study.

Lifestyle contributes to heart disease by affecting things like your cholesterol levels and blood pressure, and by making you more likely to be diabetic. If you adjust for all of these, then you are really getting down to a nitty gritty question.

And so the question they were asking in this study was really very specific. They wanted to know if, apart from all the physical things that could link religion to heart disease, there is some other, unexplained factor at work.

So what’s this study about, then?

With all that in mind, let’s take a quick look at this study. What they did was follow about 5,000 Americans recruited as part of another study and chosen to be ethnically diverse and regionally representative. They recorded heart attacks and strokes over 4 years.

As expected, nonreligious people were much more healthy than the religious. They had lower blood pressure, were leaner, and were less likely to be diabetic. They were, however, more likely to be smokers.

The effects of this could be detected in their organs. The arteries of religious people were more damaged and their hearts were enlarged.

So they adjusted for age, sex, race, education and income, like many other studies before have done. Crucially (and unlike other studies), they also adjusted for blood pressure, diabetes, obesity, and cholesterol. 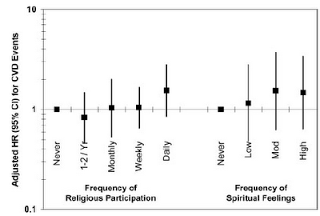 What they found is shown in the figure. After statistically adjusting for all the common physical factors that are linked to heart disease, there was no effect of religion.

In other words, whatever effect religion has on health (for good or bad), it must do it by affecting known risk factors in some way.

The really interesting thing is…

One last thing – and this is what I thought was the really mind-blowing result from this study.

They found that religious people smoked less. This was one of only two lifestyle factors that remained after they adjusted for all the demographic differences between the religious and non-religious (age, gender, race, education and income).

That’s something that’s commonly observed, and it may be because religion provides social pressure and support to help people quit.

That’s a result that has been seen in other studies, but is altogether more difficult to explain! Donald Lloyd-Jones, the study lead, put it like this:

“The obesity story is interesting, and we tried a lot of different ways to get it to go away—looking at social, demographic, and psychosocial factors—and really didn’t see any clear explanation for it,” said Lloyd-Jones. “So we’re left with this observation, and we’re not really sure what’s the cart and what’s the horse. We don’t really know if there is something about religious participation that leads to obesity, or if it’s the other way around, and that heavier people might seek out religious and spiritual experiences because of things like stigmatization.”

February 11, 2010
The brain surgery path to transcendence
Next Post

February 18, 2010 Reasonable Doubts Podcast - Religion and Society
Recent Comments
0 | Leave a Comment
Browse Our Archives
get the latest from
Nonreligious
Sign up for our newsletter
POPULAR AT PATHEOS Nonreligious
1