Can going to church change your views of god?

Christians don’t agree on the nature of their god. Their different ideas are many and varied, but one broad way of looking at it is that they tend to believe either in a personal god (one who takes an active, day-to-day interest in people’s lives and also intervenes), or an impersonal, distant god (the sort of god who lights the blue touch paper at the moment of creation and then retires to a safe distance).

So who believes in what kind of god? Well, that’s the topic of a recent paper by Scott Schieman at the University of Toronto (I was going to post on an anxiety study today, but Schieman’s paper has recently hit the newswires, and the reports miss what’s really the central point of his study).

We already know that poor people, the poorly educated, African-Americans, and women – i.e. people with low social status – tend to prefer an active, personal god. That’s not too surprising.

What Schieman wanted to know was whether belief in a personal god was linked to religious activities. He found that it was, and in an intriguing way.

He took data from the Baylor religion survey, and compared individual’s socio-economic status (a combination of income and education) and compared it with beliefs in divine involvement and divine control. He did that by creating a statistical model derived from the data, and you can see one of the outputs from that model in this figure. 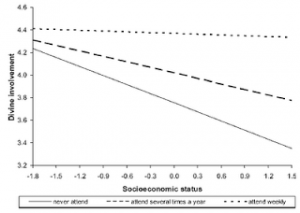 The figure shows how belief in divine involvement varies with socioeconomic status for three different groups: people who go to church weekly, those who go several times a year, and those who never go to church.

Look first at the right-hand side of the graph (where the rich people are). It shows what you might expect: people who go Church every week tend to believe in divine involvement, but people who never go to church are less likely to (but they still score fairly high).

Now look at people with low status, on the left. All of them have high levels of beliefs in divine involvement – even if they don’t go to Church!

The effect of that is that, among people who go to church weekly, levels of belief in divine involvement stay high as you move up the socio-economic scale. For people who never go to Church, these beliefs drop away as you progress upwards.

Schieman interprets this as evidence that going to church regularly can reinforce belief in divine involvement:

My observations … [contest] the view that SES is uniformly associated with lower levels of belief in divine involvement and control. The finding that high SES individuals tend to report similar levels of divine involvement and control as their low SES peers—when they share high levels of religious involvement—challenges the assertion that higher SES contributes to “demythologized beliefs” processes. In contrast, the results are more consistent with the view that exposure to messages and lessons in religious activities reinforces systems of “religious explanations”— especially doctrine about God’s involvement and causal relevance in everyday life.

He does also acknowledge that causality can work in the other direction (high status people who don’t believe in a personal god don’t go to church). However, after pondering this one quite a bit, I suspect he’s on to something.

After all, there are lots of reasons for a low status person to believe in a personal god, even if they don’t go to church. That’s fairly uncontroversial.

Could it be that repeated exposure to an environment that promotes a particular ideology actually influences your beliefs, despite all the external factors that work to undermine them? It wouldn’t be the first time that had happened!