Altruism has 3 degrees of separation

One of the mysteries of human behaviour is why we sometimes act with completely selfless altruism. When asked to play totally anonymous games in which we can cheat without anyone else ever finding out, very often we don’t.

Instead, we play the game fairly, which results in a cost to ourselves (compared with what we could’ve had) and a benefit to the stranger. That’s a mystery because evolution says that organisms which don’t act to maximise benefit to themselves – whatever the cost to others – should die out.

Several explanations have been put forward, but one of the most intriguing stems from the fact that we live in social networks. In a network like this, we depend critically on the kindness of others.

A new study has looked at how altruistic behaviour can be transmitted between players in the kinds of anonymous games that social psychologists are so fond of. The data were from some earlier experiments in which 240 people played the games over six rounds, each time with different partners (all anonymous). 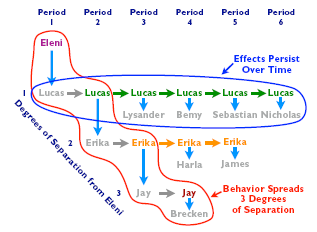 What they found was that the amount individuals contributed in one round was affected by how generous their partners were in previous rounds. If they played with generous people in round 1, then they would be more generous to the new partners they had in round 2.

In fact, they showed that this effect was propagated through new partners. As you can see in the figure, if Eleni was generous to Lucas, then Lucas would be generous to Erika, and Erika more generous to Jay.

Even within the terms of the game, this ‘paying it forward’ had a dramatic effect. The magnitude of each action (generous or cheating) was tripled as it rippled through the network. One individual’s generosity in round 1 had a major effect on the benefits reaped by players in later rounds.

The infectious nature of altruism might help to explain an anomaly uncovered by previous research. While selfless altruism crops up in these research games when they are played by Westerners, the effect among people from small tribal societies is much less. That might be because Westerners learn this kind of behaviour as a result of the anonymous transactions that are such a central part of life in the West.

It might also help to explain how selfless altruism evolved. Earlier, theoretical studies suggest that all you need is that altruistic behaviour can be copied, and that people can leave groups that have too many cheaters. If you are good, then you will benefit in the long run.

In other words, it’s good to be good, because what comes around goes around!

March 12, 2010
Can going to church change your views of god?
Next Post