Religion and the case of the disappearing right-brain

Religion and the case of the disappearing right-brain June 9, 2010 Epiphenom

Studies of brain damage give a unique insight into how the mind works. If your behaviour changes when a specific lump is taken out, then that’s pretty good evidence for the function of that particular lump. 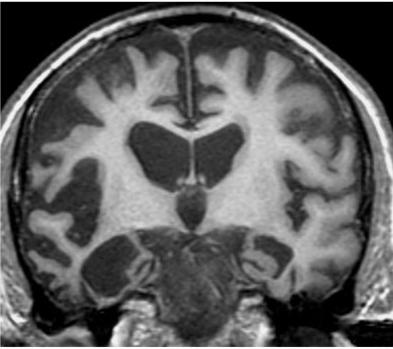 So what happens when half your brain starts to rot away? Dennis Chan, a neurologist at the Institute of Neurology in London, decided to find out.

Right brain atrophy is altogether more subtle, and also weirder. These patients get lost easily. They find it difficult to recognise faces, and they have a variety of behavioural disorders, including disinhibition and obsessions. One patient insisted on having all the light switches in her house painted gold and silver!

And, interestingly, three patients were ‘hyper-religious’.

Now, they don’t describe what they mean by this term, and three patients (15%) might not sound like a lot. But none of the patients with left-brain atrophy were hyper-religious. Two patients also had ‘complex visual hallucinations of inanimate objects’ and two had sensory crossover, in which stimulation of one sense was experienced as a different sense.

Damage to the right brain – albeit the parietal lobes rather than the temporal lobes – has been linked to religiosity previously. Brick Johnstone and Bret Glass found that people with damage in this region were more spiritual, and Cosimo Urgesi and colleagues have found that tumours in this part of the brain also increases religiosity.

That’s perhaps because the right hand side of the brain tends to play an important role in spatial awareness.

However, for the sake of the statistical purists who sometimes drop by I should point out that correlation is not causation. Although it seems likely that brain atrophy leads to religion, you can’t rule out the possibility of the reverse!

June 6, 2010
What did your mommy and daddy believe?
Next Post