Young evangelicals are greener… but no more liberal

During the last US presidential campaign, there was a flurry of excitement when pundits caught hold of the idea that some young Christian evangelicals might possibly vote for Obama (despite the fact that he is, apparently, a Muslim, or perhaps not even a Christian, or something). This would not be so surprising. After all, there is nothing set in stone about what the political and even moral beliefs of an evangelical should be. There would be nothing in principle to stand in the way of a bit of revisionism. 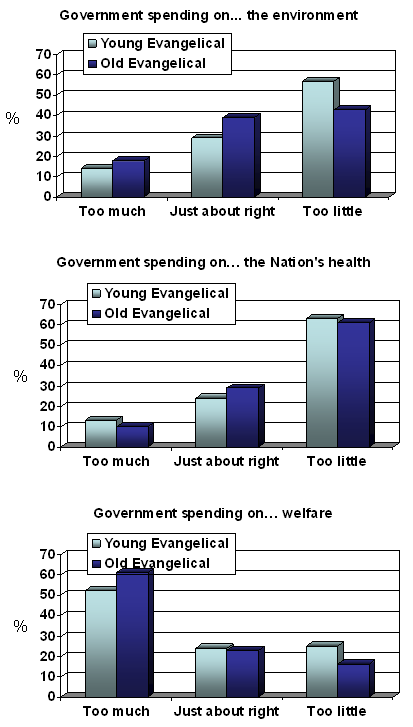 Well, it turns out that no, young evangelicals are just as likely to vote Republican as their parents. That’s according to a new analysis, by Buster Smith and Byron Johnson, of the Baylor Religion Survey (which was conducted back in 2007). That’s even more surprising given that non-evangelical youth tend to be more liberal than their parents.

Not only that, but young evangelicals are similar to their old folks on a number of other moral questions – most of them think that abortion is wrong, even in the case of a rape. They’re against smoking dope, and also embryonic stem cell reseach. And they have a particular beef about allowing homosexuals to marry.

So much for issues of personal morality. What about broader political issues? Well, here it gets a little more interesting.

But that’s it. The only difference. Young and old thought similarly about government health and welfare spending.

There’s a couple of things that fascinate me about this analysis. It doesn’t surprise me that views on personal morality are shared between young and old. I guess that means these are a core feature of evangelical identity. If you drop them, then you are no longer part of the gang. Although I don’t see the religious link to maijuana use, I can see how religious ideals of purity (homosexuality confuses gender), procreation (abortion reduces fertility), and essentialism (embryonic stem cell research means changing one thing into another) are essential building blocks of evangelism.

Similarly, I can see how green issues could be up for grabs. The Bible doesn’t really have a lot to say about anthropogenic climate change, but I’m guessing (I’m no expert here) it does have some bits that talk about looking after your patch.

But the results for health and welfare suggest that these, too, are a core part of the evangelical identity. Why should that be? Why should rejection of state welfare be linked to evangelism? Is this an inheritance of the old (and probably mythical) ‘Protestant Work Ethic’?

The second thing that strikes me is that these evangelicals – young and old – actually support more government spending on the environment and health. I suspect that’s not a view shared by many non-religious, fiscal conservatives.

Good evidence, all-in-all, of issue bundling. What we are lookgin at is poor, ill educated people who want the government to spend more on their health (if not welfare), but who vote Republican because their religious views on personal morality take priority.

August 16, 2010
Praying and staying together - and away from those infidels
Next Post