Blink and you’ll miss it (depending, of course, on your religious beliefs)

The attentional blink is another of those weird and wonderful cognitive blind spots with which the human race is afflicted. Flash up two images in close succession, and we find it really difficult to even notice the second, let alone figure out what it is. That’s basically because our brains are still engaged in processing the first one.

In another recent study by Lorenzo Colzato (she also did the “big picture” study from a couple of blog posts ago), atheists and Dutch Christian Calvinists have had their attentional blinks assessed.

The set-up is pretty simple. A series of single-digit numbers flash up on the screen, then a letter, then a few more numbers, then another letter. The task is to identify the two letters. 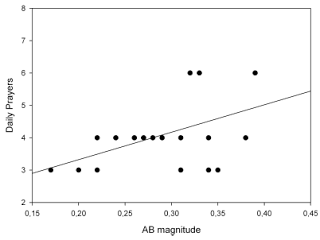 Lorenzo found that the atheists she tested had a shorter attentional blink than the Calvinists. In fact, as the figure shows, there actually seems to be a fairly direct relationship between how often the people in her study prayed, and the length of their attentional blink.

She thinks that this is related to her earlier finding (that Calvinists are ‘detail’ people rather than ‘big picture’ people). Calvinists are trained from birth to focus on a narrower, rather than a bigger context, and Lorenzo thinks that this has widespread effects on their style of information processing – when compared to individuals who are raised with a broader, more complex worldview (including religious people).

Now, I have no idea whether a long attentional blink is a good or bad thing. I guess it depends a lot on the circumstances. It is, however, interesting to note that an earlier study, which showed that meditation can shorten your attentional blink, came down firmly on the side of believing this to be a good thing.