Are you a big-picture person, or do you tune into the detail? Surprisingly, the culture in which you were raised – including your religion (or lack of it) can shape this fundamental aspect of your personality. 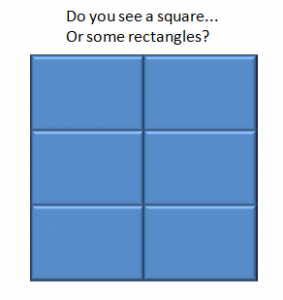 A decade ago, researchers found that while westerners were relatively faster at picking out the component parts of a picture, Asians were relatively quicker to see the global, holistic components. They reckoned this was an effect of cultural differences – the individualistic Westerners versus the collective, community-oriented Asians.

In a new series of studies, Lorenza Colzato, a cognitive psychologist at Leiden University in the Netherlands, and colleagues has shown that, within both of these culture, religion can affect where attention is focussed. Remarkably, it seems that the type of religion, not religion itself, is the critical factor.

The tests use something called a global-local task. Essentially, the subjects are shown either a square or a rectangle, which are themselves made up of smaller squares and rectangles. The task is to spot the shape of either the ‘big’ picture or its components.

Pretty much everyone is faster at identifying the big shape. Asians, however, are even faster than Westerners – but at the cost of slower identification of the smaller component shapes.

Colzato compared a group of Dutch Calvinist Christian Students with a similar group who were raised as atheists. The Calvinists turned out to be ‘detail’ people, at least when compared with the atheists. This bias to the detail was evident even in those whose faith had lapsed, indicating that whatever is causing it must happen during childhood.

Then they swapped countries and religions – Roman Catholics in Italy and Jews in Israel. Here the effect was reversed. In these countries the religious were less detail-oriented, and more focussed on the big picture, than the non religious

In the ultimate test of their theory, they teamed up with Shulan Hsieh, at the National Cheng Keng University in Taiwan, one of the least individualistic countries in the world. They found that local Buddhists were more likely to be ‘big picture’ people than were the local atheists.

Colzato thinks that the different religious cultures are affecting the way their subjects look at the world. Dutch Calvinism is highly individualistic, and so children must (so the theory goes) be rewarded for ‘correct’ behaviour – for focussing on the local, and ignoring the wider environment.

Catholicism and Judaism, on the other hand, emphasize collective, social responsibility. Children growing up in that environment are learn to pay more attention to the wider picture, and less on individual responsibility.

Buddhism is very different. However, according to Colzato, it emphasizes the physical and social context in which the practitioner lives. Since meditation is not a particular feature of Taiwanese Buddhism, it’s unlikely that meditation caused the effects they saw.

Now, it is of course possible that what we’re seeing here is selection bias. It might be that those people whose attentional bias doesn’t mesh well with the predominant religion are more likely to become atheists. That’s possible, although the fact that atheist converts differed from those raised as atheists in the Dutch study would tend to suggest that isn’t the case.

Whatever the source of these differences, it does seem likely that culture, religion, and attentional bias are closely intertwined. After all, you would expect that a collectivist culture would develop a religion that fitted and reinforced their collectivist needs.

If that’s the case, then the rise of atheism could trigger some interesting cross-cultural ‘levelling’!