An eye for an eye

Religious people are more likely to approve of capital punishment. That’s something that’s always intrigued me – partly because I find the idea of killing another human being in cold blood absolutely horrific. To be fair, however, there’s a lot of variation between different religious groups in the support for the death penalty, and perhaps that holds at least a partial answer. Maybe there’s something in the creed of certain religions, or sects within religions, that encourages notions of revenge and retributive justice. 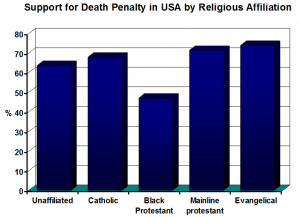 When you look at the bare data, it seems that’s likely to be the case. Evangelicals are more supportive than Catholics, for example. Black Protestants are even less supportive that the unaffiliated. Perhaps that’s down to leadership. After all, some religious leaders are vocal in their support for the death penalty, but others are equally vocal in their rejection of it.

Kevin Wozniak and Andrew Lewis, Political Scientists at American University in Washington DC, set out to discover whether affiliation really does play a role in support for the death penalty. To this end, they mined data from the 1998 US General Social Survey (the last year in which the survey assessed all the items they needed).

Throwing all the data into the pot, they first adjusted for relevant non-religious factors. Men, for example, and right-wingers are more likely to support the death penalty. African-Americans, however, are less enthusiastic – no doubt because they are disproportionately likely to be on the receiving end.

When you take all this into account, they found that all Christian groups they looked at – Evangelical, Mainline Protestant, Black Protestant and Catholic – were still more in favour of the death penalty than the unaffiliated.

So it seems like there really is something intrinsic being religious that increases support for the death penalty – regardless of your views on the nature of your god.

Why this should be, they don’t know. They were most interested in learning whether denominational leaders influence the attitudes of their flock. If this analysis is correct (and they point out that it may not be attuned to the right level of detail) then it seems like this is not the case. Despite the fact that many leaders are anti-death penalty (most notably the Catholics), their flocks seem undeterred.

What they couldn’t determine was whether local leaders, the individual priests and pastors, can influence the attitudes of their parishioners. They may well be, but even if true it wouldn’t alter the fact that the average religious person is a pro death penalty.

I suspect that this is shining a light on something fundamental about religion, which has to do with notions of good and evil, of us and them. What precisely that is, I don’t know. But I suspect that support for the death penalty is actually a manifestation of intolerance, and of preferential support for your group or tribe, that seems to be such an  intrinsic part of religious belief.