When in doubt, preach!

Recent years have seen an extraordinary phenomenom. A modern-day cult is spreading rapidly across the globe, advancing from its US homeland on the back of a small army of evangelical preachers. People of all backgrounds, but particularly the young and the wealthy, are recruited to its ranks – only to become in turn preachers themselves.

I am talking, of course, of the Cult of Apple.

But what inducers cult members to preach their gospel? New research by David Gal and Derek Rucker, at the Kellog School of Management at Northwestern University, suggests that shaking a person’s confidence actually can make them more likely to go out and preach.

How likely would they be to try to persuade the Windows user to switch to a Mac? Well, it turned out that it depended both on their own state of mind, and on whether the target was open to persuasion. 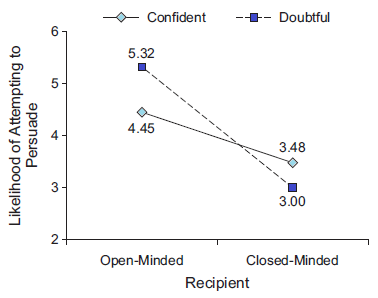 This wasn’t a one off, either. They did another experiment which showed that students would spend much longer composing a persuasive message to convert someone to their own dietary habits (carnivorous, vegetarian, vegan) if they were feeling doubtful. They got a similar result after asking students to write about their views on animal experiments.

The authors link this effect to the classic study by Leon Festinger, who infiltrated an apocalyptic cult back in the 1950s. When the end-time predictions of the cult leader failed, the previously-secretive cult members responded by turning to active advocacy and proselytisation.

There’s also the case of George Alan Rekers, a prominent homophobic campaigner who recently was revealed to have hired a rent boy.

Gal and Recker reckon that doubt about closely held attitudes and beliefs can adversely affect your view of yourself. Cult members whose faith has taken a hit proselytise as a way to resolve their own doubt, and thus restore their self-image. And they finish with a warning:

Finally, the present research also offers a warning to anyone on the receiving end of an advocacy attempt. Although it is natural to assume that a persistent and enthusiastic advocate of a belief is brimming with confidence, the advocacy might in fact signal that the individual is boiling over with doubt.

October 24, 2010
Do people reject evolution because it unnerves them?
Next Post