Evangelists love Wal-Mart – even the ones who should know better 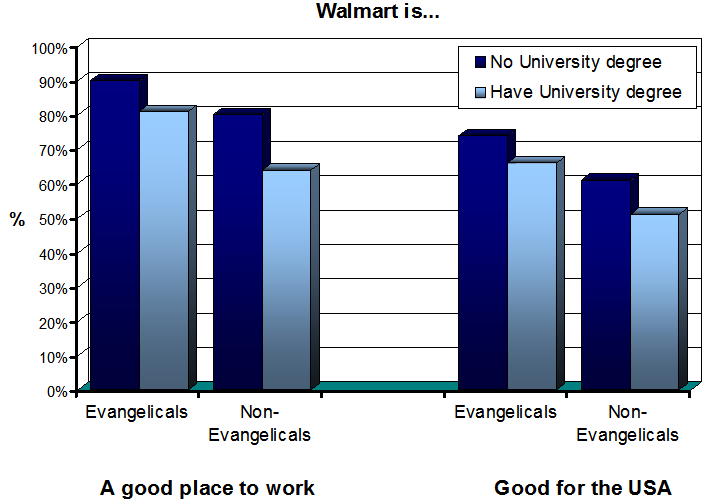 Wal-Mart is the biggest US supermarket chain, with a controversial anti-union policy and low-wage policy. So you might think that the people least happy with the business might be those at the bottom of the social pile.

In fact it turns out that the opposite is the case. According to research by Rebekah Massengill, at Princeton University, the people who are most positive about Wal-Mart are the ones who are least-educated – and income seems to have no effect at all (although the poorest people tend to think that it’s a good place to shop).

That’s probably because of the close ties between Wal-Mart and the Evangelical movement. According to Massengill:

Sam Walton was widely regarded as an evangelical Presbyterian, the company continues to market Christian books and tapes, and its very foundations emphasize a conception of family values quite compatible with the evangelical moral worldview (Moreton 2006, 2009). Thus, Wal-Mart’s own discourse through advertising campaigns and press releases provides an opportunity for “signaling” evangelical shoppers via the language it uses to celebrate free enterprise, prioritize the family, and honor the nation …

Apparently eager to maintain its relationship with this key demographic, Wal-Mart recently avoided a boycott by the American Family Association by backing away from its largely symbolic partnership with the National Gay and Lesbian Chamber of Commerce…

That probably won’t surprise anyone living in the USA, but it was news to me :). The interesting finding, however, is that although educated evangelicals are somewhat less approving of Wal-Mart, the effect of education isn’t as marked as it is among everyone else.

Massengill thinks that this is because, although education generally has a liberalising effect, among evangelicals it could cause a reactive swing to conservatism:

And one last thing. Wal-Mart here in the UK (aka ASDA), has no Christian, let alone evangelical, overtones. Which makes me think that the company is simply using Christianity as a marketing ploy, as required, to appeal to the huddled masses in their various markets!

January 22, 2011
Atheists Are Generous-They Just Don't Give to Charity
Next Post