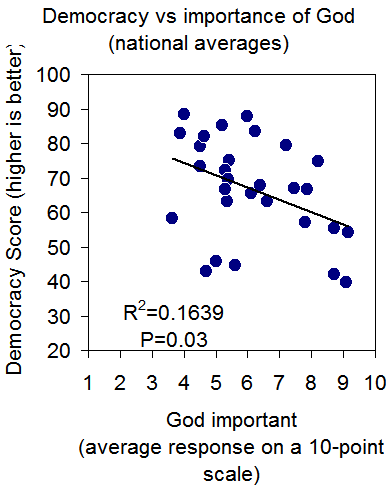 A new analysis from the University of Zurich rates 30 nations on the strength of their democracy. All interesting stuff, but it’s at times like this that I like to ask ‘How does it correlate with religion’.

So, if you were wondering the same, here’s the answer. Those countries whose population rated God as less important in their lives, were also the countries where democracy is strongest.

The relationship is statistically significant, with an r-squared of 0.16 (which means that about 16% of the variation in god-belief can be ‘explained’ by variation in democracy – or vice-versa).

Not a great surprise, of course. It’s just the latest in a long line of similar results – the least religious countries are more peaceful, have less corruption, more telephones, do better at science, have less inequality and other problems, and are generally just less dysfunctional.

As usual, those dastardly Scandinavian countries, with their strong social welfare programmes, liberal morals, and strong social ethics, come out on top on both scores.

This is a nice sample of nations, though. Because they’re mostly pretty wealthy (the poorest, South Africa and Costa Rica, have per-capita GDPs around $10k), it’s not too badly distorted by wealth.

Just a note on the data. The religion numbers come from Waves 4 and 5 of the World Values Survey (I used Wave 5, unless a country was only represented in Wave 4). I used the “Importance of God” question because it’s the only one asked consistently in both Waves.

The democracy number “uses 100 empirical indicators to measure how well a country complies with the three democratic principles of freedom, equality and control as well as the nine basic functions of democracy” (Science Daily).

So there you go. More evidence that the least religious countries are the best places to live. Who’da thunk?

January 24, 2011
Evangelists love Wal-Mart - even the ones who should know better
Next Post