A dose of pain to take the guilt away

A dose of pain to take the guilt away February 8, 2011 Epiphenom 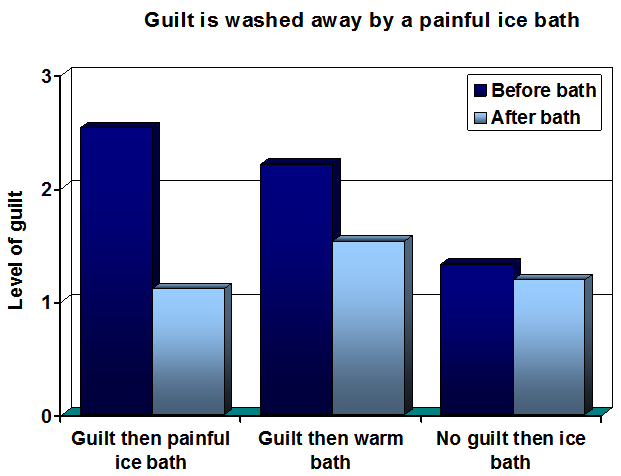 Can you take away the feelings of guilt through self harm? Well, here’s one way to find out.

Take 59 Australian students, and split them into three groups. Get two groups to write about something they did that they feel guilty about.

Then get one of those groups to stick their arms into iced water – if you’ve ever tried to do that for a long time, it hurts! The other group gets nice warm water. The third group writes about just some everyday interaction, but then they get the ice bath too.

When Brock Bastian, of the University of Queensland, and colleagues did that they found a couple of things. First the students who wrote about a guilt-ridden experience really did feel more guilty.

This is the second study I know of to show this effect. The other one, published last year, used a different technique (it made people feel like they’d let their partner down in a co-operative game, and the self-punishment was not physical), but the basic results were the same.

Any one study is always a bit suspect. But two independent studies with similar results is much more robust. Darn it, there might just be something to all this guilt-atonement thing. Here’s what Bastian and colleagues have to say:

…pain may be perceived as repayment for sin in three ways. First, pain is the embodiment of atonement. Just as physical cleansing washes away sin (Zhong & Liljenquist, 2006), physical pain is experienced as a penalty, and paying that penalty reestablishes moral purity. Second, subjecting oneself to pain communicates remorse to others (including God) and signals that one has paid for one’s sins, and this removes the threat of external punishment. Third, tolerating the punishment of pain is a test of one’s virtue, reaffirming one’s positive identity to oneself and others.

But there’s still a couple of nagging doubts in my mind. It seems clear that self-punishment could be a signal to others that you’re truly sorry, but in this experiment people actually felt less guilty (i.e. less sorry) after the pain. What good is it to me to know that you were sorry, but that you’re over it now because you’ve stuck a needle in your arm?

Secondly, is this a cross cultural effect? Both these experiments were conducted in countries aligned to Christian notions of atonement. Although religions often have a pain fixation, usually it involves displays of fidelity, rituals of self enhancement, or attempts to reach a transcendent state (or all three). It’s only Christianity that’s made atonement and penance a central part of ritual self-harm.

If that’s the case, then is what we’re seeing here a basic human instinct, or is it a cultural construction? Do these students feel less guilty after self harming simply because that’s what happens in the films?

Bastian B, Jetten J, & Fasoli F (2011). Cleansing the Soul by Hurting the Flesh: The Guilt-Reducing Effect of Pain. Psychological science : a journal of the American Psychological Society / APS PMID: 21245493

February 4, 2011
Casual sex is not so bad after all
Next Post

February 11, 2011 Grammar Nazi? Then you're probably an atheist!
Recent Comments
0 | Leave a Comment
Browse Our Archives
get the latest from
Nonreligious
Sign up for our newsletter
POPULAR AT PATHEOS Nonreligious
1