Bowling together… in most of Europe, at least

Bowling together… in most of Europe, at least March 12, 2011 Epiphenom

Ten years ago, the sociologist Robert Putnam created shockwaves with his analysis of the breakdown of US society in recent decades –

Putnam’s analysis of the causes was pretty nuanced (read: no-one really knows), but he did point out that the decline of religion in the US has gone hand in hand with the decline in other forms of so-called ‘social capital’.

In his latest book, American Grace, Putnam goes a bit further, arguing that religion is a kind of social glue. Take a look at this, from a review of the book:

Religious Americans are better citizens than non-religious ones (they give more to secular causes, volunteer more for secular causes, and join more, to mention a few markers of good citizenship). However, it is not their particular theology that predicts good citizenship, but the extent to which they are embedded in a friendship network of religious others (regardless of their religion). [Putnam refers to these religious friends as “powerful, supercharged friends.”]

Well, so much for the USA. What about godless Europe?

Europe must be in a pretty parlous state, without religion to bind communities together! You might think so, couple of pieces of recent research suggest that simple assumption is not really warranted.

Anna Rita Manca, of the ominous-sounding EU Institute for the Protection and Security of the Citizen, crunched through some data from the European Social Survey and found that, sure enough, religious Europeans score highest on ‘Social Capital’.

By ‘social capital’ she’s talking about two kinds of activity:

Religious people come out higher on social engagement but not private engagement – not too surprising when you look and see that being a member of a religious organisation scores you a point!

But let’s not worry about that, because there’s something much more interesting going on. 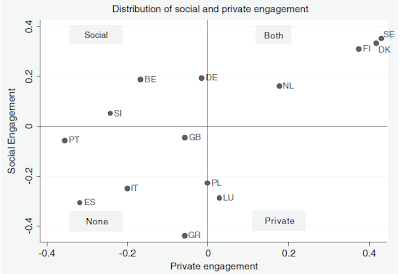 Take a look at this figure, which shows average levels of social capital (both social and private) in European Countries.

In the top right of the graph, in the area representing high levels of social capital, who should we find but our old friends the Nordic countries!

In fact, there’s a general trend here – those countries with the least religion have the most social capital. And that’s despite the fact that, even in Nordic countries, religious individuals tend to score higher.

We’ve been here before. In fact, this seems to be quite a common trend. When you question individuals about their behaviour, the non-religious often seem to come out worse. And yet, when you look at nations, those with the fewest religious people regularly come out on top on a range of social issues.

So what does the future hold? Perhaps, you’re thinking those Nordic countries would come out even higher if they still had their religion. Perhaps they are declining from a golden age some time in their religous past?

Well that’s where research from Francesco Sarracino, at the University of Florence in Italy, comes in. Sarracino used a broad array of measures of social capital, including trust, unpaid voluntary work, and membership in organisations (including religious ones).

He found that, in the period 1980-2000, social capital had increased overall in virtually all European countries – despite declining Church going and declining trust in Church institutions. Sweden, Denmark and Norway have all seen increases in social capital over that time – and this was matched by an increase in well being.

There was one exception to this general European trend: the UK. Now, of all European nations, the UK is most like the USA. Over the past 20 years, social capital in the UK has generally gone down – and the people of the UK have become unhappier.

To me, this says that religion is unimportant for social capital. Rather, there is some shared disease that is corroding society in both the UK and in the USA. If our leaders are genuinely interested in stopping the rot, they should worry less about religion and instead figure out what the real disease is.

March 7, 2011
They said they wanted a revolution
Next Post