A basic psychological link between religion and right-wing politics 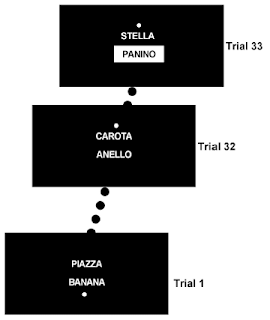 Humans are fine tuned to spot coincidences. Take, for example, an experiment done a few years ago by Paola Bressan and Peter Kramer, psychologists at the University of Padova in Italy. They asked their subjects to watch a computer screen, where dots would appear either above or below a pair of words. They had to press one of two keys on the keyboard, depending on where the dots appeared.

After 32 rounds of this, one of the words, unexpectedly, appeared as white on black (Trial 33 in the picture). Now, this was completely irrelevant to the task at hand, but even so it captured people’s attention. They took longer to press the button, as they couldn’t help pondering the meaning of the unexpected change.

The strange thing was, those who reacted most strongly to this change were those who also reported being religious as a result of personal experience. They found it harder than others to dismiss the coincidence.

Not only was this effect linked solely to religiosity derived from personal experience (and not, for example, linked to family history or church attendance), but this link was entirely explained by belief in the meaningfulness of coincidences.

What’s this got to do with politics, though?

Now, the thing was that almost always it was the letter ‘M’ that was shown, and this set up the expectation that the next letter would also be an ‘M’. So this was a test of whether the subjects could break free of their expectations.

What Amodio found was that liberals were better able to break free of this conditioned response, and to correctly withhold their response when a W was shown.

According to a recent article by Kramer and Bressan, both these experimental results can be explained by the same psychological phenomenon. They speculate that we create ‘schema’ – fundamental concepts about how the world works. Beliefs, in other words.

These schema can be useful, because they speed up mental processing. By employing grand, simple rules of thumb they save mental effort – but at the expense of accuracy.

By employing this schema, the brain can move on from chewing over things that may not have any survival benefit. The results may not be accurate, but they may be good enough not to be actively harmful. One consequence, however, could be illusions and conspiracy beliefs.

Kramer and Bressan’s ideas are pretty speculative. But whatever you think of them, it is truly remarkable that both religiosity and right-wing ideology can be predicted solely on the basis of an inability to cope with randomness.

Now surely that can’t be a coincidence?