Religion and conflict: cause or coincidence?

Religion and conflict: cause or coincidence? March 22, 2011 Epiphenom 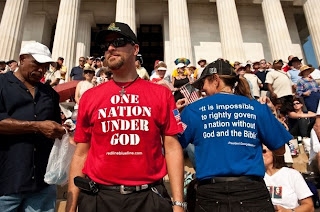 Conflicts often fracture along religious lines – the Balkans, Israel/Palestine, Northern Ireland to name just a few of the best known. But it’s hard to say that religion is the cause of the problem. There are always other factors, like ethnic differences and disputes over land rights.

So what’s going on here? Is religion really the cause of conflict, or is it just an innocent bystander?

In a recent analysis of survey data from 30 European countries Malina Voicu, a sociologist at the University of Bucharest in Romania, found that people who said they were proud of their country were significantly more likely to also be religious.

This relationship held even after controlling for a bunch of other factors that could explain differences in religiosity – age, sex, education, income, religious denomination, living in a post-communist nation, and living in a poor country. All of these factors were important, but even after taking these into account, nationalistic people were more religious.

But that’s not the whole story. What Voicu did next was to look at what she calls “religious concentration”. That’s a measure of how divided a country is religiously – whether there is one dominant religious denomination, as opposed to a more fragmented picture.

What she found was that the more united a country was religiously, the closer the link between nationalism and religion.

So it seems that religion does not necessarily trigger national pride. But when religion and nation are aligned, they reinforce each other.

I think that what this really does is show once again that it is simply too simplistic to talk about ‘religion’ as if it is a real, single entity (Voicu used a basket of different measures of religiosity, and lumped them all together). Religion is, in fact, a jumble of different cultural and psychological traits some of which (at different times, for different reasons, and in different mixes), we lump together and call it ‘religion’.

One of those components is a kind of nationalism. It’s always there, but in the right circumstances – when religion and nation match – then nationalists are attracted into religion, and religion itself changes accordingly.

March 16, 2011
A basic psychological link between religion and right-wing politics
Next Post