For the past 8 years, the folks at the Center for the Study of Aging and Human Development at Duke University Medical Center, North Carolina, have been scanning the brains of a small band of elderly people. They’re trying to discover whether changes in the volume of the hippocampus, a small part deep in the brain, are linked to late-onset depression and dementia.

The hippocampus plays an important role in learning and memory, and it’s known that it decays at an ever-increasing pace as we age. Of course, there are plenty other things you can do with a dataset like this, and (sponsored by the Templeton Foundation) one of the things they’ve done is to see which religious groups lose it fastest.

But there was a significant difference according to affiliation. 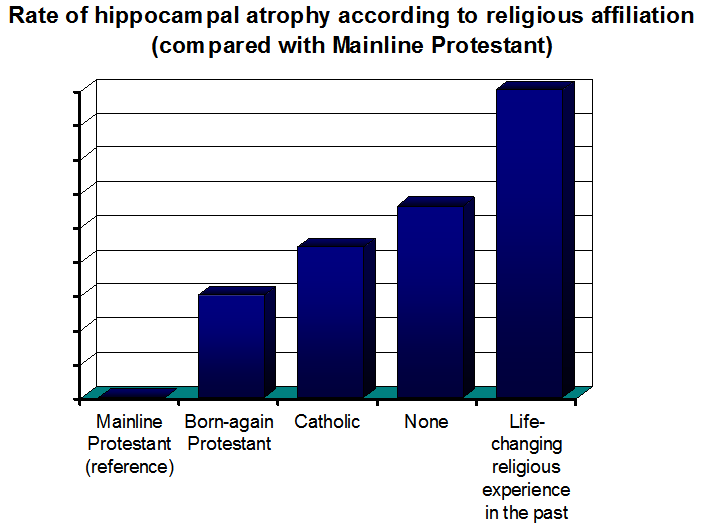 As you can see in the graph, the rot was slowest in mainline Protestants, faster in born-again Protestants and Catholics, and faster still all in those with no religion. The group who fared worst were those who had experienced a ‘life-changing’ religious event sometime in the past.

The authors put this down to the stress of being in a minority group. It’s known that high levels of stress can increase the rate of hippocampal rot.

In this part of the South-Eastern USA, mainline Protestants are the overwhelming majority – and other evidence shows that being in a minority can make life stressful for the non-religious.

Similarly, having a ‘road to Damascus’ type of life-changing religious experience can mark you out as an oddity, and someone to be shunned.

So far so reasonable. However, people with ‘other’ religious affiliations (presumably mostly Jewish) held onto their grey matter just as well as Mainline protestants. Surely these religious minorities should feel at least as much exclusion as Catholics?

And no, in case you were wondering. They don’t tell us who had the biggest brains at the start of the experiment!

May 13, 2011
Non-religious nations have higher quality of life
Next Post