Religion only makes for happy people if there’s a lot of it about May 8, 2011 Epiphenom 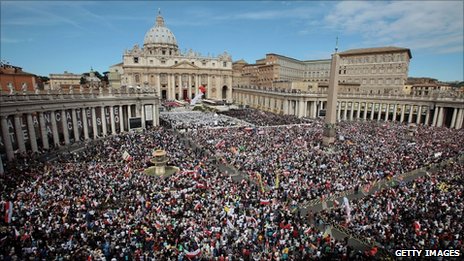 In the previous post I wrote about how the link between religion and happiness, often thought to be rock-solid, doesn’t seem to apply in England.

That suggests that the relationship between religion and happiness might vary from society to society. Now a new analysis, by Jan Eichhorn at the University of Edinburgh, finds that this indeed might be the case. He looked at 43 countries, mostly from Europe but also including the USA, Australia and New Zealand.

Same as everyone else Eichhorn found that, on average and after taking other factors into account, religious people (whether measured by belief or attendance) tend to be happier. However, countries with more religious people weren’t happier on average.

But then he did something different. He looked at the interaction between personal belief and the the national average. And that revealed a subtly different picture.

Having strong religious beliefs isn’t linked to happiness in countries where few others have strong beliefs, or where few people go to Church. Eichhorn explains:

People who place a higher importance in god, however, are happier when they live in a country where others do as well. Furthermore, when many people in the country attend religious services regularly, their happiness also is found to be higher.

As the reverse is not the case—people who attend services more often are not happier when the average personal level of importance of god is higher—it appears to be that happiness through religiosity can mainly be derived through conforming to the standard in their country—in particular the visible standard.

May 3, 2011
Being religious doesn't make the English happier
Next Post