May 3, 2011 by Epiphenom
0 Comments
Being religious doesn’t make the English happier May 3, 2011 Epiphenom 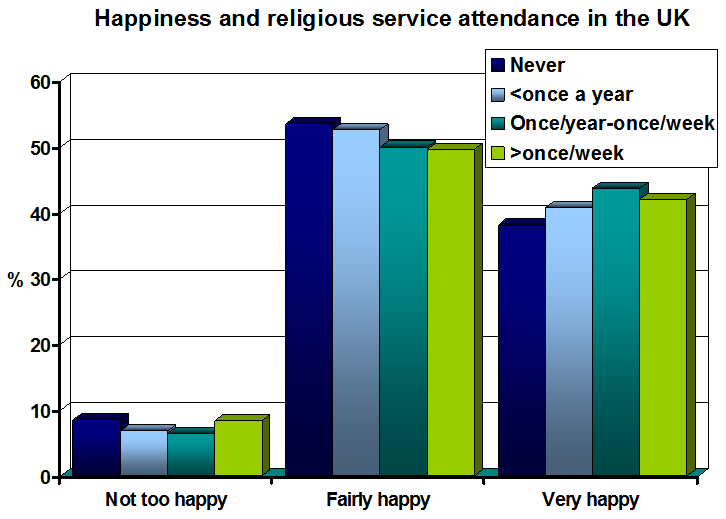 It’s one of those givens that everyone accepts. Religious people are happier people. Now, you can argue why that might be – perhaps it’s the social activities, perhaps it’s the confidence that comes from believing in some kind of guardian angel.

Or maybe it’s simply what comes from being in the mainstream. In most countries, being non-religious is a minority pursuit – and that’s especially the case in the USA, where most research is done.

So it’s nice to see some research from the UK. Claudia Cooper, a psychiatrist at University College London, analysed data from over 7,000 people who took part in the 2007 English National Psychiatric Morbidity survey.

In common with other surveys, there was no relationship between religious/spiritual beliefs and happiness. Stronger god-belief did not equate to more happiness.

There was, however, a small, statistically significant link between attending Church (or Mosque, or Synagogue) and happiness. That’s what I’ve shown in the graph.

That’s pretty similar to what other surveys have shown. But what’s interesting is that Cooper broke down the results by age. She found that the ‘happiness effect’ of going to Church only appeared in the over 80s.

The very old tend to be more religious than younger people, but actually less likely to go to church than those aged 60-80 (probably because of ill health). Perhaps, as a result, they have fewer alternative social support networks. Or perhaps it’s simply that those who are well enough to get out to Church are happier just because they are healthier!

Whatever the reason, these data show that for English people under 80 years old, there is no link at all between religion and happiness.