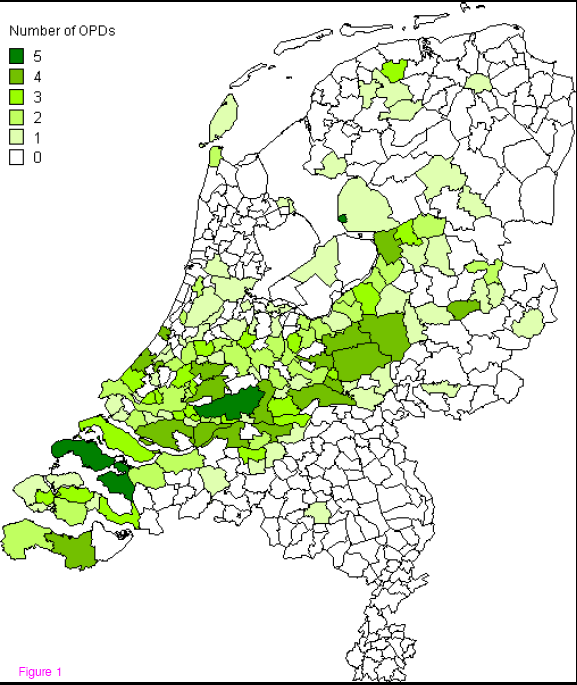 These epidemics were all largely confined to an area stretching from the south-west to the north-east of the country. This is the Dutch Bible belt – shown in the graphic – where there are a relatively high number of orthodox (aka fundamentalist) Protestants. Almost all patients in these epidemics belonged to the orthodox protestant minority and were unvaccinated because of religious objections.

But what’s not clear is whether Protestant minorities have a low vaccination rate, and whether that is really linked to their religion. After all, they are also more likely to be rural, and low-income.

So Wilhelmina Ruijs (Radboud University Nijmegen Medical Centre) and colleagues looked to see whether regions of the Netherlands with more Orthodox Protestants have lower vaccination rates, after controlling for urbanization, poverty, and immigration.

It turns out that they do. Vaccination was a little lower in areas with a lot of Orthodox Protestants – 93.6%, compared with 96.9% elsewhere. That’s a small difference, but it only takes a small drop in vaccination rates to decrease ‘herd’ immunity to the point where an epidemic can break out.

More interestingly, 84% of the variation in vaccine coverage from one area to the next was down to the presence of these churches. The other factors had relatively little influence.

May 3, 2011 Being religious doesn't make the English happier
Recent Comments
0 | Leave a Comment
Browse Our Archives
get the latest from
Nonreligious
Sign up for our newsletter
POPULAR AT PATHEOS Nonreligious
1