Get out and vote “Yes to AV” in the UK referendum 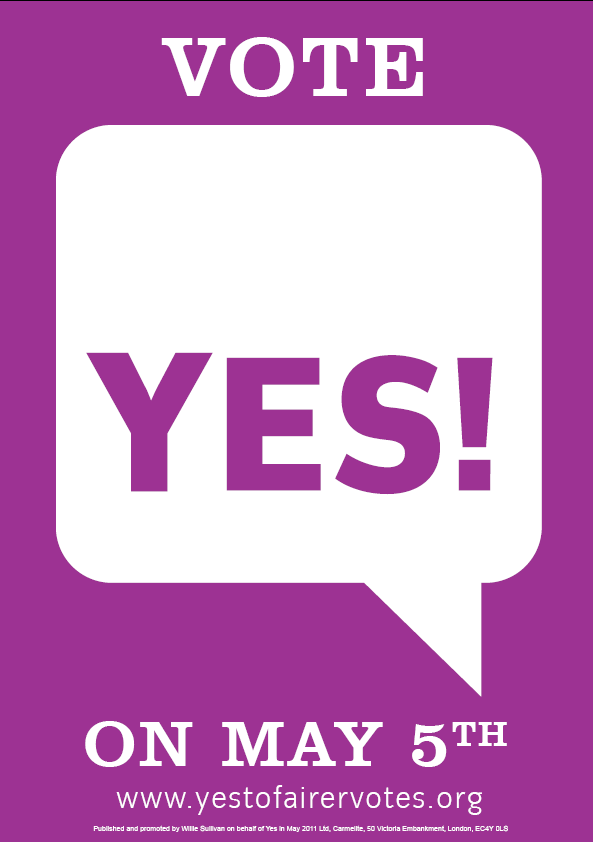 90% of the readers of this blog are from outside the UK. If you’re one of them, look away now – this post is not for you!

In fact, it’s not even about science and religion. I almost never deviate from the regular fare on this blog, but this is a topic that’s really dear to my heart – the UK referendum on 5th May on changing the the voting system.

If you’re a typical reader, then you’re an educated liberal, and so you probably already support the AV system, at least in vague terms. But what you might not know is that it’s going to be very close.

That means that every vote counts – which means you! This is a once in a lifetime opportunity to make the UK electoral system fairer. AV is not perfect, but it’s a damned sight better than first past the post, and we won’t get another chance in the foreseeable future!

So do me a favour and get out and vote on May 5th! And get all your friends to go and vote too. If you don’t, we’re going to be stuck with the same god-awful system we’ve got now.

The No campaign has a huge slush fund, donated by a handful of the super-rich. The Yes campaign can’t compete, and there’s a real danger that money, rather than ideas, will win out. But the Yes campaign advantage lies in the large groundswell of popular support – and it’s networking and word of mouth that will win the day.

They have a website, Yes to Fairer Votes, where you can sign up to help out. Do what you can!

For any non-UK people still with us, the UK is holding a referendum on whether to change the current system (where you put an X next to a single candidate) – to the so-called ‘alternative voting system’ (where you rank candidates in order of preference).

The current system is deeply flawed, because most candidates get elected without the support of the majority of the electorate (because there are usually many candidates for each seat). Even worse, people often vote tactically – for the candidate they think has a chance of winning, rather than the candidate they actually want.

The result is an artificial two-party government. It’s impossible to challenge the incumbent in most seats. If the party bureaucracy puts a monkey in as your local candidate, then you have to vote for him (or her). If you vote for an unofficial candidate, then all that happens is that the vote is split and neither of the candidates you want gets in.

It’s a truly awful system, and the UK needs a better one! AV has been described as a ‘miserable compromise’ but actually it’s just about the best voting system if you want to keep the ‘constituency’ organization that is so deeply ingrained in the British heritage.

Here’s a couple of my favourite videos to explain it. They’re a bit nerdy but hey, this is a kinda nerdy blog! Talking of which, here’s a longish post by Tim Gower, a mathematician at Cambridge, explaining the benefits of AV.

The first video is a straight up explanation of why AV tends to give fairer results:

And this second one is a bit more partisan – explaining why the UK in particular will benefit.

Here endeth the partly-political broadcast. Normal service resumes in the next post. Just get out and vote “Yes to AV”, OK?

April 29, 2011 Religious groups reduce vaccination rates
Recent Comments
0 | Leave a Comment
Browse Our Archives
get the latest from
Nonreligious
Sign up for our newsletter
POPULAR AT PATHEOS Nonreligious
1