For example, believers in a judgemental god are more likely to support the death penalty, and are more likely to suffer mental ill health. Back in 2006, Gary Jensen (a criminologist at Vanderbildt University) showed that so-called ‘passionate dualism’ – i.e. religious worldview characterised by intense beliefs in a clash between good and evil – is a major cause of homicide.

In this new study, they sat students down to what they thought was a warm-up task on basic numeracy (adding up a bunch of numbers – simple but tedious). Unfortunately, the computer programme had a glitch that showed the answer after a few seconds. The students were asked to be honest and press the space bar to make the answer go away – without looking at it.

Of course, this was no glitch. In fact, they were interested in whether (and how often) the students did the honest thing and pressed the space bar.

So does that mean that encouraging belief in punishing gods will reduce cheating. Well, it’s not quite that simple. 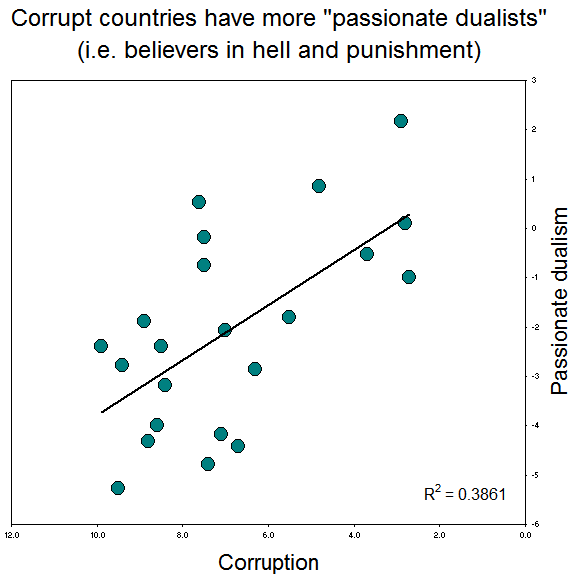 Take, for example, this graph that I just knocked together. It plots ‘Passionate Dualism’ – based on Gary Jensen’s original measure of heaven and hell beliefs – against corruption (the Corruption Perceptions Index). It goes in the opposite way to what you might expect – the greater the level of belief in punitive gods, the more corruption a country has.

One reason this might happen is that Shariff’s study was a scientific study, done in isolation from any context. Yet the most common cause of cheating is actually when people feel that they’ve been hard-done by elsewhere, as this article in the NY Times explains:

“Cheating is especially easy to justify when you frame situations to cast yourself as a victim of some kind of unfairness,” said Dr. Anjan Chatterjee, a neurologist at the University of Pennsylvania who has studied the use of prescription drugs to improve intellectual performance. “Then it becomes a matter of evening the score; you’re not cheating, you’re restoring fairness.”

What’s more, individuals who are convinced that they have the moral high ground are actually more likely to cheat. Perhaps believers in a punitive god have had experiences in the past that make them feel like they are victims of injustice, and also that they are strongly in the right.

Well, this might help to explain it, but it certainly isn’t the full story, and it probably isn’t the most interesting one.  Much more interesting is the likelihood that people change adapt their concept of god to suit the society in which they find themselves. Here’s Shariff and Norenzayan:

… the concept of a punishing God should be expected to be more widespread in societies where the threat of freeloading is high, such as those lacking effective social institutions, experiencing internal or external threats, or both. This hypothesis raises the possibility that the widespread belief in benevolent deities is a modern phenomenon—the consequence of a gradual change in religious beliefs.

Their point is that believing in a punishing god is actually very stress-inducing. An earlier study found that reminders of God make Christians less fearful of death – but make Muslims more fearful! That was mainly because, unlike the Christians, they had solid belief in hell. Back then I commented that:

The function of Hell is to reinforce social order by threatening punishment to wrongdoers who can’t be brought to justice by normal societal mechanisms. As a strategy, it’s not terribly successful. Medieval Europe is not renowned as an era of peace, justice and harmony.

But perhaps in the absence of more effective social controls, promoting fear of hell is better than nothing. When better social controls are invented – such as in modern Europe – Hell is no longer needed.

If Hell is no longer needed in modern Europe, then Heaven still is. People still die, and our basic, evolved instincts make us all fear of death. The prospect of heaven can reduce that fear – but only if you abandon the inconvenient concept of hell.

The feel-good version of religion, like atheism, is what you get when you remove danger and threat from people’s lives.

April 26, 2011 Get out and vote "Yes to AV" in the UK referendum
Recent Comments
0 | Leave a Comment
Browse Our Archives
get the latest from
Nonreligious
Sign up for our newsletter
POPULAR AT PATHEOS Nonreligious
1