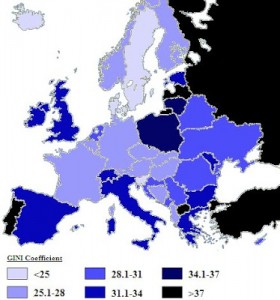 You may have seen the article by Jo Stiglitz, Nobel-Prize Winning Economist, in the current issue of Vanity Fair, in which he rips into the yawning chasm of wealth inequality that now exists in the US. Dan Ariely (of Predictably Irrational fame) is also in the news, talking about his study in which he showed that US citizens don’t actually know how unequal their nation is, and that regardless of political persuasion they’d like it to look more like Sweden.

Now, inequality is a complex social problem, but regular readers will know that the link to religion is something that fascinates me.

Countries with higher income inequality also tend to have citizens who pray more and who go to Church more often. Now, one explanation for this is that, when wealth disparities are large, life can get more stressful – especially (but not only) for those at the bottom of the heap.

That’s where a new analysis by Daniel Stegmueller, a sociologist at Goethe University in Frankfurt Germany, and colleagues comes in. They looked at data from 16 Western European countries that took part in the European Social Survey in 2002-2006. One of the questions asked in the survey was the extent to which people agreed that “The government should take measures to reduce differences in income levels”.

People who said they had a religious affiliation (Catholic, Protestant, or’other’) were less likely to agree. That held even after adjusting for a wide range of other factors, like age, income, social class, employment status, children, and whether the respondent was on a temporary contract. They also adjusted for the political climate of the country (social democratic versus liberal, and social conservatism).

Now, there are three reasons that the religious might be less keen on social welfare. The first is that they may get social support from their fellow Church members, and so be less interested in state support. But, in this analysis, churchgoing had no effect on support for welfare.

Another possibility is that believers may think that God will take care of them. Or they may think that their god will favour them, and so they will not end up at the bottom of the pile. That’s certainly a possibility that is not ruled out by this analysis.

But the third possibility is that religious people may resent the idea of giving money to people who aren’t part of their ‘gang’. That wouldn’t be surprising – it’s well known that countries that have a large mix of ethnicities have lower support for government welfare. People don’t mind paying taxes to help their own kind, but they’re not so keen to see their money going to help ‘them’.

Indeed, Stegmeuller found that more religiously polarized countries (defined by the difference in religiosity of religious group members compared with non-members) had lower the support for social welfare.

So religious polarisation reduces support for social welfare. But the surprising thing was that it had no effect on the link between individual religious affiliation and rejection of governmental intervention to reduce inequality.

Even in the least religiously polarized countries, religious people are still just as opposed to the idea that the government should try to reduce inequality.

April 16, 2011
Tunisia evenly balanced between religious and secular
Next Post