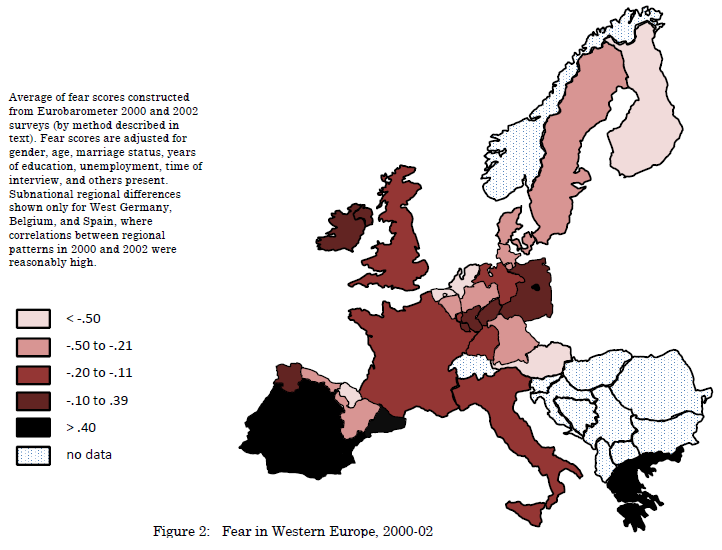 Daniel Treisman, a political scientist at UCLA, has come up with a way to measure how fearful nations are. Many surveys ask respondents how worried they are about a range of subjects – war, terrorism, crime, environmental pollution, etc. What Treisman found is that is that if an individual admit to being worried about one threat, they are also highly likely to say they are worried about the others.

In other words, any given individual tends to be generally fearful, or generally unafraid. That means you can construct an ‘Index of Fear’ by averaging the responses to several questions.

Now, the interesting thing is that fear is often not all that closely linked to real danger. There was no relationship between fear of BSE and actual number of cases, and only a weak relationship between fear of medical errors and the number of medical errors, and between terrorism and number of terrorist attacks. Fear of bird flu was actually highest in the countries with the fewest cases!

Fear was influenced by all sorts of  weird effects. People are less scared if you quiz them in the evenings – Treisman speculates they may have partaken of a few bevvies already!

But more important that religious affiliation (or, indeed, virtually anything else) was belief in Heaven and Hell. Belief in Heaven tended to lower fear somewhat, but belief in Hell had a dramatic and opposite effect.

Those countries where a lot of people believed in Hell were more fearful across the range of potential threats. In fact, much of the apparent relationship between religious traditions and fear could be explained by the degree of hell-belief.

That chimes with some other research showing that British Christians are made less anxious by thoughts of death than are British Muslims, mainly because the Christians are less likely to believe in Hell.

Of course, it may be that people living in genuinely scary countries are more likely to believe in Hell. But Treisman adjusted for factors that are linked to real danger – like poverty, authoritarian rule, war, and even more touchy-feely factors like educational styles, cultural masculinity and individualism. And remember he also found that fear is a social construct, and only loosely related to objective threats.

To me, this looks like good evidence that putting the fear of god into people actually makes them more fearful of everything else – and that, of course, has a number of interesting political and social ramifications!