Do kids have to be taught about the supernatural?

Here’s a new study by Ashley King, a grad student at the University of Arizona. She ran a group of 124 children aged 4-8 through a carefully designed study designed to see whether they understood what supernatural omniscience is. 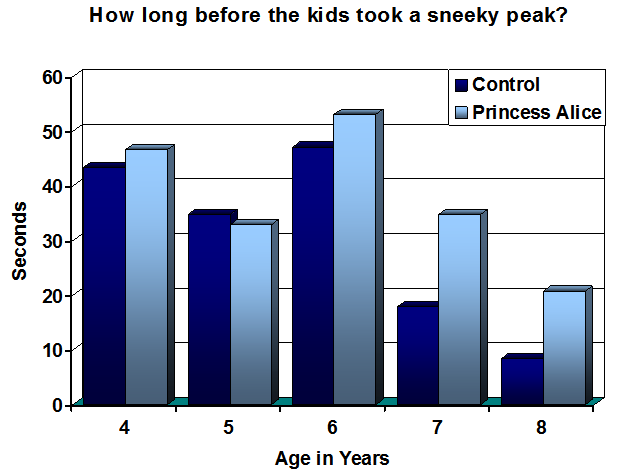 The basic set-up has been used in previous studies. Half the kids were shown a video of someone calling herself “Princess Alice” who said she had special invisible powers and  would be present through the whole ensuing test. The other half were just shown a video of the same person wearing jeans and t-shirt who simply welcomed them and said she was a friend.

After a few other tests, they were given a puzzle by the experimenter. Basically, this involved some numbers hidden on the bottom of wooden blocks that were shown to the child and shuffled behind a screen. The child then had to guess where the different numbers were – an impossible task of course.

The experimenter then was called out of the room – she told the child that she would be gone for exactly three minutes, and left a clock showing how much time had elapsed. Question is, for how long could the children resist the urge to cheat by taking a quick peek at the numbers on the blocks?

As the graphic shows, the answer is “not very long”! But the interesting thing is that there does not seem to be much difference between the kids who thought they were being watched by Princess Alice, and those who did not.

Even more interesting, Princess Alice did seem to make a difference for the older kids. If they thought Princess Alice was watching, they took twice as long to summon up the courage to peek.

Now, it has to be said that this difference was not statistically significant using the test that King used. However, the magnitude of the difference is large, and I suspect that if the data from the 7 and 8 year olds had been pooled, a difference would have been clear.

So this supports the earlier studies by Jonathan Lane, which found that only older kids really get the idea of omniscience. Younger kids assume that supernatural beings have more ordinary mental capabilities.

In other words, it seems that this aspect, at least, of our beliefs about gods does not come naturally. It has to be learned.