Simply being near a church makes people more hostile to outsiders

Priming studies (in which you plant thoughts or topics in people’s minds without their being aware of it) typically take place in laboratories. But you can get the same effects in the real world too. So, for example, people will vote differently depending on the location of the polling booth (in a Church, in a school, etc).

In a recent study, Jordan LaBouff (University of Maine) worked with colleagues at Baylor College to discover whether attitudes to different groups are affected by subliminal Christian priming.

Now, this could go either way. Most modern Christianity is at pains to be inclusive, spreading the message that all men are equal. On the other hand, we know that high religious fervour is often associated with distrust of outgroups and people who are, well, different. 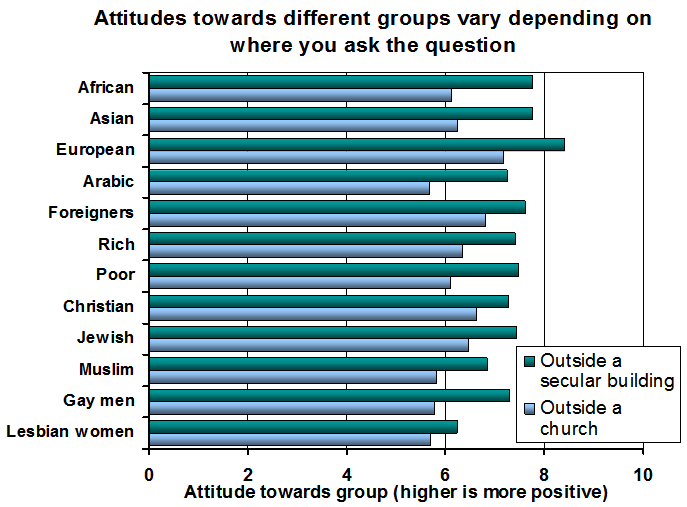 So what effect does religious priming have on ordinary people? To test this, LaBouff stopped people at random outside a church in the Netherlands (and, to check if the effect was culturally specific, a few people outside Westminster Abbey in London). He asked them a series of questions, including asking them to rate their attitudes to different groups on a 1-10 scale.

He also stopped some other people in a location that contained only civic buildings (in England, the location chosen was the Houses of Parliament).

The mix of people was pretty typical for the area – 39% nonreligious, the rest Catholics and Protestants with a few religious minorities. They were pretty international too – only 28% were Dutch.

What I find remarkable about these results is how consistent they are. Sure, attitudes to Africans, Asians, Arabs and gay men take a hefty knock, but then so do attitudes towards the poor.

Not at all the effect that pious surroundings are supposed to induce!

January 30, 2012
Do kids have to be taught about the supernatural?
Next Post