How your genes can affect your response to religion

How your genes can affect your response to religion January 9, 2012 Epiphenom

Dopamine is a neurotransmitter, a chemical that carries a signal across nerve junctions. You might know of it because of its links to Parkinson’s disease, but it’s actually pretty widespread in the brain and does a number of interesting things.

Variants of one particular molecular receptor for dopamine, the D4 receptor, seem to have interesting links with risk taking and novelty seeking. But the links are not at all straightforward, and recent research suggests that what it actually does is tweak your susceptibility to environmental influences.

Joni Sasaki, at the University of California, Santa Barbara, wanted to know if this could help explain the mixed responses to religious priming that have been reported before. As regular readers of this blog will know, giving people subliminal religious prompts seems to make them more prosocial, but the effect doesn’t seem clear cut. 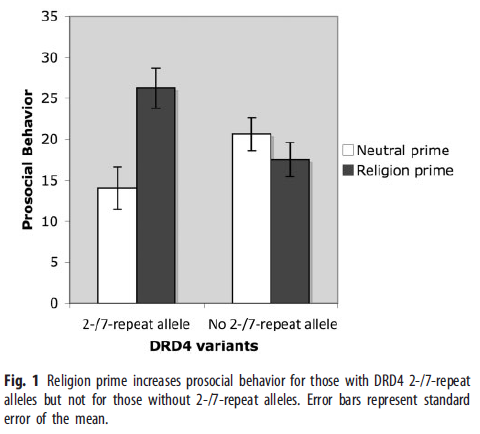 So what Sasaki and colleagues did was to run a straightforward religious priming experiment. The subjects (all undergraduates) had to unscramble words to form sentences. Half the subjects were given sentences that had a religious theme, the other other had non-religious sentences. The idea is to get people thinking about religion without realising what they are doing.

Afterwards, they measured their subjects willingness to volunteer for a bunch of actual organizations and clubs around the college.

But not everybody responded to the priming. As the graphic shows, the response depended on the variant of the D4 gene. People with one particular variation (2-/7-repeat allele) got a really big prosocial boost from the religious prime. People with the other variant were pretty prosocial without the prime, and their prosociality actually decreased with priming!

All this goes to show that the relationship between genetics and religion is not at all straightforward (something I’ve touched on before. This particular gene variant seems to make people more susceptible to environmental influences – whether religious or otherwise.

January 5, 2012
Who thinks Britain should be a Christian country?
Next Post

January 13, 2012 Religion and health - a double edged sword
Recent Comments
0 | Leave a Comment
Browse Our Archives
get the latest from
Nonreligious
Sign up for our newsletter
POPULAR AT PATHEOS Nonreligious
1