The handedness of belief 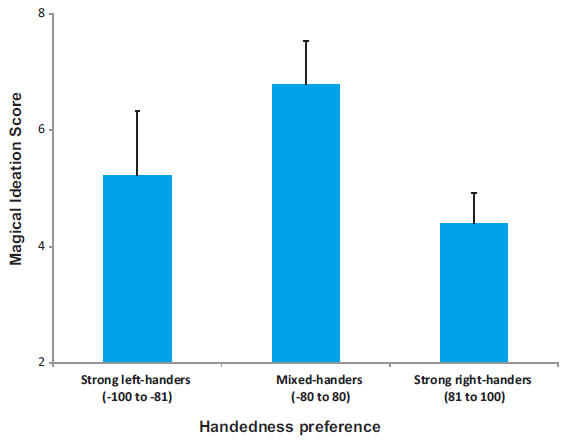 People who are ambidextrous are more likely to have magical beliefs. That’s something that was known before but has recently been confirmed by Gjurgjica Badzakova-Trajkov and team from Auckland University, New Zealand.

The figure on the right shows how high their subjects scored on a ‘magical ideation’ scale, which asks questions such as “Some people can make me aware of them just by thinking about me” and “I think I could learn to read other’s minds if I wanted to”.

Handedness was assessed just by asking their hand preferences for a variety of tasks, like throwing or using scissors. As you can see, those people without a strong hand preference were also the most likely to have magical ideas.

So you might think that ambidextrous people are more likely to be religious? Well hold on.

A few years ago Christopher Niebauer, at Slippery Rock University in the USA, showed that ambidextrous people are more likely to believe evolution (in the USA at least). [That paper was sent to me last year, but I can’t remember who sent it. If it was you – well thanks!]

Why should this be? Well, one theory is that the brains of ambidextrous people are wired up differently. Not only are their hands less one sided, but their brains also may be more even across the two hemispheres – less ‘lateralized’.

And that’s where Badzakova-Trajkov’s research comes in. She showed that the brains of people who think magically were just as lateralized as the brains of more rational thinkers. What’s more, when she measured handedness by a proper test – rather than just asking people about their preferences – the relationship with magical thinking disappeared.

She concludes from this that the connection between ambidexterity and magical thinking is behavioural, not neuropsychological. What’s probably happening is simply that those people who are open to magical thinking, and who are willing to take on-board radical ideas such as evolution, are also more open to the idea of using their non-dominant hand to do normal daily tasks.

These people are just iconoclasts by nature!

February 9, 2012
How the 2004 Tsunami affected the religious beliefs of Norwegian tourists
Next Post