Three puzzles of non-religion in Britain

Britain, like many countries in the West, has been undergoing a decline in the numbers of religious believers. The patterns of change, however, throw up some curious anomalies. Three of these puzzles have recently been investigated by David Voas, a demographer at the Institute for Social and Economic Research at the University of Essex – all quite different, each of them quirky, and all of them shedding a little fascinating insight into the trends and patterns of non-belief in the UK.

First off, why are baby girls more likely to be religious than baby boys? If that question at first sounds nonsensical, it’s because the UK census asks parents to state the religious affiliation of their children. The result is a small sex difference – one or two extra girls out of every hundred are labelled as being ‘Christian’ compared with boys.

The reason, Voas found, is probably because dads are less likely to be religious than mums. The child is given the religious affiliation that matches their same-sex parent. And so the gender gap is the biggest for families with a non-religious dad and a religious mum. 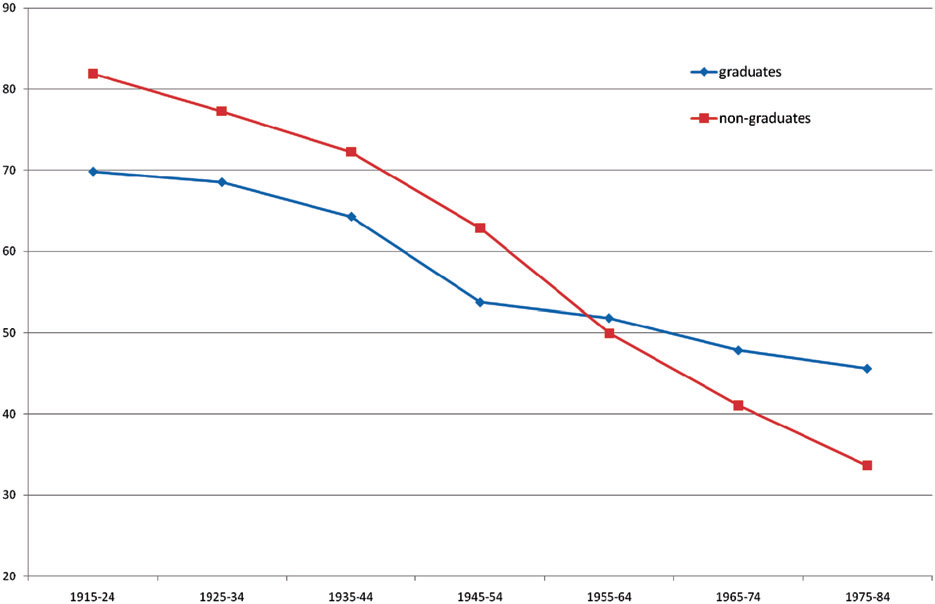 For the second puzzle, just take a look at this graph. It shows the change in religious affiliation since 1915 among graduates and non-graduates.

Affiliation has declined in both groups, but it’s been much faster among the non-graduates. As a result, although non-graduates were more religious than graduates at the start of the last century, now they are actually less religious!

It seems that this is probably because graduates are much more passionate about their beliefs – either religious or non-religious. Non-graduates are more likely to be in the fuzzy middle – nominally religious but not really devout.

In other words, this is another artefact of the crude measure of religion used in the UK census. Because it only records broad affiliation, it misses the subtleties.

The last puzzle surrounds the patchiness of religious affiliation in Britain. If you look at a very fine level (at the level of individual local council wards), the percentage of people saying that they don’t identify with a religion ranges from 1.9% all the way up to a most godless 42.4% (this godless epicentre is actually a place in Brighton, just down the road from where I live).

Voas found that this variation can only partly be explained by factors such as average age and professional status. An additional major factor was the number of religious people in neighbouring wards.

So it seems that religion and non-religion tends to aggregate into clusters, although what causes this aggregation is hard to say, but Voas suspects that factors like social history and local economic factors probably play a large role.

On top of this, some areas have a strong local culture. Brighton, for example, has a long tradition as venue for a bit of escapism from the moral straitjacket of London soceity – as a result, the place is now full of counter-cultural Bohemians of all types! (And me…)