Religion, self esteem and psychological adjustment

Much is made of the apparent fact that religious people are happier and better adjusted than the non-religious. However, as regular readers of this blog will know, this is to a large extent an illusion.

The problem is that most research is done in the USA, where being religious is the cultural norm. If you look further afield, you’ll find that religion is only linked to happiness in countries where a lot of people are religious.

Well, here’s some more on that theme. It’s from Jochen Gebauer (Humboldt University, Berlin) and Constantine Sedikides (University of Southampton, UK) – who’ve featured here before in a couple of previous posts. This time, they’ve used data from the dating site e-darling – nearly 190,000 people from 11 European countries.

The beauty about these dating sites is that they ask people to fill in a lot of information about themselves.

So, for example, they were able to put together an estimate of each individual’s psychological adjustment, based on the self-ratings of the degree to which they were adaptable, cheerful, optimistic, or resilient (and other similar factors). They also estimated social self-esteem, based on ratings of things like how skilled the individual perceived themselves to be in social situations, and making new friends. 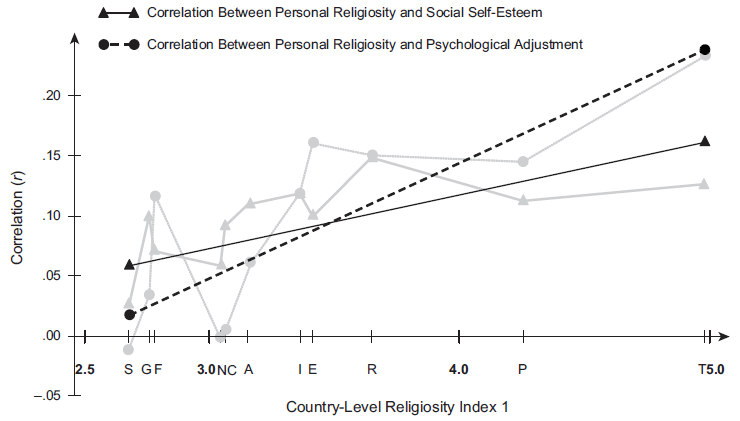 Take a look at the graph. Each data point in light grey represents a single country. The x-axis is the average religion in a country. The y-axis is the correlation between religion and psychological adjustment (or self-esteem) in that country.

So, on the far right, we have Turkey (represented by the letter T!). It’s all the way over there because it has the highest average religion.

And Turkey also has the highest correlation between personal religion and psychological adjustment (and social self esteem).

Sweden, on the other hand, is on the far left, with the lowest average religiosity. It also has the lowest correlation between person religion and psychological adjustment.

In fact, there’s a clear, statistically significant trend – the higher the average strength of religion in a country, the higher the correlation between personal religion and psychological adjustment or social self esteem.

Now, that’s all very interesting and adds some more flesh to the picture which is revealed by other studies. But here’s what I find particularly interesting about this graphic.

Even in the least religious countries, where even moderately religious people are in a minority, the correlation is not negative.

And that’s got to be good news for secularists (and religious people).

February 19, 2012
Three puzzles of non-religion in Britain
Next Post