Can a pill take away the desire for religion?

Can a pill take away the desire for religion? February 27, 2012 Epiphenom

Well yes it can – in a manner of speaking.

Today’s study is one that was actually published in 2010, and has been languishing in my files. I just rediscovered it!

It’s one of a trio from Aaron Kay and colleagues, at the University of Waterloo in Ontario. They’ve published a few studies before on how the need to feel in control of situations can drive a heightened sense of religiosity (e.g. here, here, here and here).

This study took an unusual approach. First they gave their subjects (37 undergraduates) a ‘herbal. pill. They told them that they were going to take part in an experiment to learn the effects of this pill on colour perception. Of course, the pill was just a placebo and the experiment had nothing to do with colour perception.

And then they hold half their subjects that the pill had an unfortunate side effect – it would cause some “mild arousal or anxiety”. 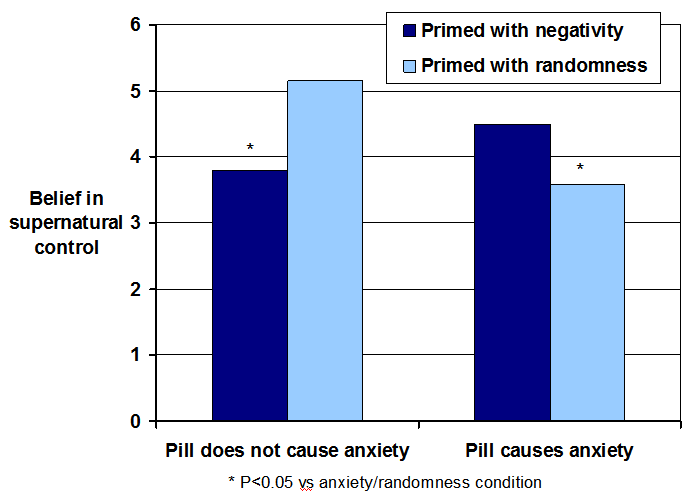 Next they put their subjects through some pen and paper exercises (while they waited for the pill to ‘metabolize’). Half  the subjects were given a word game that implanted in their mind ideas related to randomness, by featuring words like “chance” and “random”. The other half got negativity words – stuff like “poorly” and slimy”.

Now, the idea of this is that priming thoughts of randomness should heighten the subjects’ religiosity. And so it did.

As you can see in the graphic, if they weren’t told that the pill caused anxiety, then priming with thoughts of randomness significantly increased belief in a controlling god.

However, if they were told that the pill would make them feel anxious, then the effect disappeared.

What Kay thinks is happening is that the randomness prime makes his subjects feel anxious, and they restore their sense of well being by affirming a belief in a controlling god, thereby dealing with the stress of randomness.

But the subjects who were told the pill caused anxiety had a rationale explanation for the stress they were feeling (or so they thought). Because they could explain it, they didn’t need to turn to belief in a controlling god.

So there you go. A pill can reduce religiousness – so long as it’s a pill that you think will cause anxiety (but doesn’t really)!

February 23, 2012
Religion, self esteem and psychological adjustment
Next Post