Church and freedom from depression: cause or effect?

That churchgoers in the USA are less likely to be depressed than non-Churchgoers is pretty well established now. However, what’s always been unclear is whether this is down to cause or effect.

Does going to Church reduce your risk for depression? Perhaps the social interaction help to prevent it, or perhaps the spiritual beliefs are a buttress against depression.

Or is it simply that depressed people tend to stay indoors and become reclusive?

One way to find out is to follow people over time. See whether depression precedes a loss of religion, or vice versa.

One recent study followed 114 30-year olds living in New Haven Connecticut. When questioned 10 years after the initial interviews, they found that among the 72 individuals whose parents had suffered depression, those who had said that religion or spirituality were very important to them were the least likely to have become depressed. 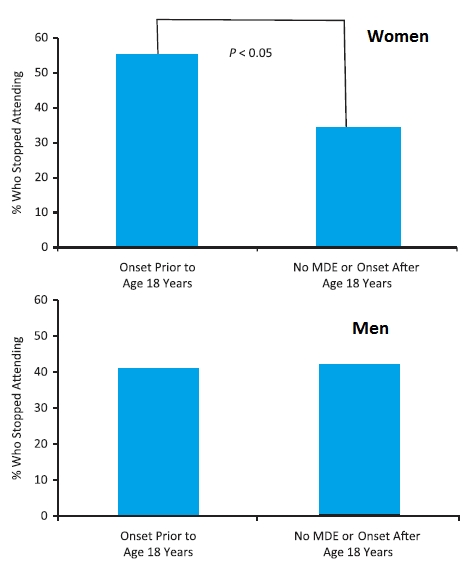 The second study was much larger. They followed 2,000 people in Rhode Island for nearly 20 years. Joanna Maselko, the lead author on the second study, has done some previous research on this topic (I covered one study back in 2008 (Being closer to god linked to more depression).

What they found that, for women at least, those who had been depressed before age 18 were much more likely to stop going to church when they were older.

In fact, after adjusting for other factors, these women were 40% more likely to stop attending religious services. For men, however, there was no effect.

So, why did these two studies come up with such different findings?

Well, the first study was pretty small, and you should always be sceptical of small studies. But there were some key differences in the way they approached the problem.

The first study sought out people whose parents were depressed, while the second study looked at a more random selection of people.

Could it be that spiritual beliefs help to defend against depression, but not churchgoing or socialising? Unfortunately the second study didn’t examine beliefs. And, frustratingly, neither of them looked at the reverse of their original hypothesis (i.e. whether depression was linked to future spirituality in the firs one, or whether religious people are less likely to become depressed in the second).

So these studies join what is a very patchy picture overall. There does seem to be some link between religion and depression. But what that link is, I can’t say!

February 27, 2012
Can a pill take away the desire for religion?
Next Post