Religion, but not spirituality, helps protect against post-earthquake trauma 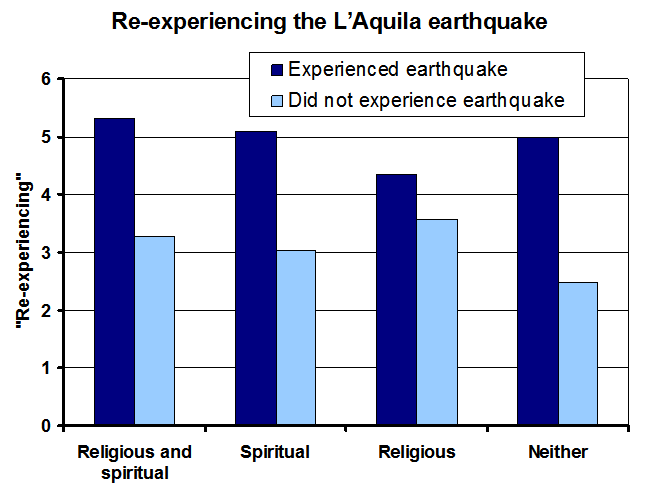 On the 6th of April 2009, a 6.3-magnitude earthquake struck the town of L’Aquila, in central Italy. The result was at least 309 deaths, with more than 1,000 people injured and 66,000 displaced. (After the earthquake, 6  scientists were put on trial for failing to predict it).

Overall, those who had experienced the event reported that they had fewer spiritual experiences and beliefs. You can compare that with two other recent studies. Religious beliefs of Norwegian tsunami survivors did not changes in any systematic way (although they were more likely to change), while people bereaved in 9-11 terrorist attacks tended to become less religious. Overall, I would say that people change their beliefs in response to a traumatic event, and in religious countries (USA, Italy), that probably means becoming less religious.

This study also found that people who had directly experienced the earthquake also reported suffering more post-traumatic stress. That’s not surprising, but they found something interesting when they divided the respondents according to whether they they said they were religious, spiritual, both or neither.

This only reached statistical significance on two of the many subscales they looked at – assessing whether people had anxious flashbacks (shown in the graphic), and whether they were affected emotionally (things like dulled emotions, feeling cut off, or changed personality). But overall the effect seems to be robust.

The “Re-experiencing” subscale of the questionnaire they used asked whether, since the event, their subjects had ever:

While the “Arousal” scale asked whether they had:

But if you look at the graph, you can see that something more complex is happening. The reason that there is no difference among religious people is not just because between those who experienced the event have fewer ill effects. It’s also because those who did not directly experience it have more flashbacks.

It seems that religious people who did not directly experience the event were still affected by it, while those who did experience it were less affected. Perhaps this is because they are plugged into a wider social network, which allows the burden of distressing events to be shared.