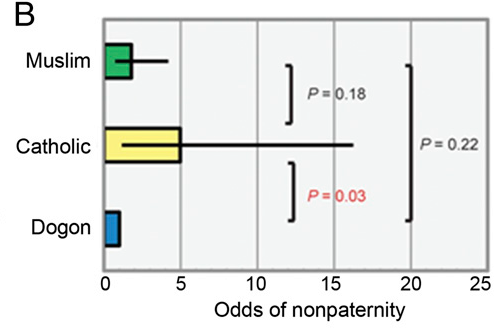 You may have seen this one recently – perhaps under a headline such as How Religion Promotes Confidence About Paternity. It’s an eye-catching headline, but that’s not actually what the study showed – for a start, they didn’t compare religious with non-religious people.

Actually, what the data reveal is a more complex and rather more interesting picture.

First, to summarize what was done. Beverly Strassman (University of Michigan) and colleagues have been studying the Dogon of Mali in West Africa, who practice a range of different religions. Most of them hold on to their traditional beliefs, some are Muslim, and increasing numbers have been converted to Christianity.

They’ve built up a large genetic database, allowing them to test 1,706 father–son pairs in 29 patrilineages to see if they match.

What they found was that the Dogon had the lowest odds of non-paternity, followed by the Muslims (although this difference was not statistically significant), while the Catholics had the highest rates of cuckoldry.

Strassman looked into several possible explanations (polygamy, poverty etc) but the one that stood out was a particular cultural practice that marks out traditional Dogon culture: menstrual huts.

Dogon women have high fertility. Typically they are either pregnant or lactating, so menstruation is a rare event that is usually rapidly followed by pregnancy. Traditional Dogon culture demands that menstruating women relocate to special huts, close to where the men of a single patrilineage live. It’s an effective way to control the reproductive options for these women.

Dogon Muslims have abandoned these huts, but Muslim women must notify their husbands and are not allowed to pray. So they clearly signal their fertility.

Christians don’t have any such safeguards, which likely explains their higher rates of cuckoldry.

That’s not to say that Christians tolerate cuckoldry. Far from it. In fact these religions strictly forbid it and warn of supernatural punishment (certainly that’s the case for Christianity and Islam).

All of this got me thinking. After all, one popular argument is that world religions helped to bring about complex societies. They did this by facilitate interactions between strangers by increasing trust – by threatening cheaters with supernatural punishment.

Maybe what we’re seeing here is the flipside of that. Christianity, a religion designed for the complex urban societies of the late Roman period, has fewer rules and regulations designed at forcing honest behaviour. It relies, instead, on assumptions of trust backed up by threats of supernatural punishment.

As a result, world religions – and the  relative personal freedom they allow – actually make cheating easier, compared with the controlling traditionalist religions. Just a thought.

June 9, 2012
Christians find it harder than atheists to recognize their own faces
Next Post