In the US, belief in life after death is linked to belief in a just world and lower anxiety

In the US, belief in life after death is linked to belief in a just world and lower anxiety June 5, 2012 Epiphenom 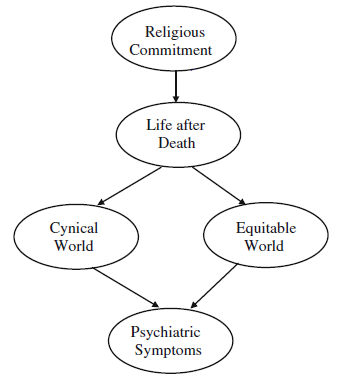 Religion and afterlife beliefs are pretty tightly bound together, and there are several ideas why that might be. One is that belief in an afterlife might make help people to be more relaxed about threats and adversity in the here-and-now.

Kevin Flannelly, at the Spears Research Institute in New York, and colleagues assessed data from the 2010 Baylor Religion Survey to see whether belief in the afterlife was linked to different world views.

He found that positive beliefs about the afterlife (belief that the afterlife means a union with God, a reunion with loved
ones, and/or a life of eternal reward or eternal punishment) increased the likelihood of believing that this world is just.

In other words, people who believed in an afterlife were more likely to think that “Anything is possible if you work hard” and that “Everyone starts out with the same chances in life.” They were less likely to agree that “The world is controlled by a few powerful people” or that “Finance is a field where people get rich without making a real contribution to society.”

Flannelly also found that people who believed in a just world had less anxiety and other psychiatric symptoms such as paranoia, obsession and compulsion.

Plugging these results into a statistical model, he found that the lower level of psychiatric symptoms seen in religious people in the Baylor survey can be explained as a result of their belief in the afterlife, moderated by its effects on their beliefs in a just world. He interprets this in terms of Evolutionary Threat Assessment Theory, which hypotheses that hypersensitivity to threats in your environment (real or imagined) is a fundamental cause of many psychiatric symptoms.

Now, these results are interesting for a few reasons. Firstly, they support other results which suggest that religious people are more likely to believe that the world we live in is just – that people succeed or fail because of their own attributes, and dumb luck has little influence (and that, in turn, may help to explain the link between religion and opposition to the welfare state).

Personally, I’m not convinced that this is caused by belief in the afterlife. It seems to me that these attitudes are more likely to come about through a belief that a god is intervening in this world – and that any beliefs in the afterlife are part of the package, rather than a direct influence.

Muslims are pretty freaked out by their prospects in the afterlife, for example!

June 9, 2012 Christians find it harder than atheists to recognize their own faces
Recent Comments
3 Comments | Leave a Comment
Browse Our Archives
get the latest from
Nonreligious
Sign up for our newsletter
POPULAR AT PATHEOS Nonreligious
1