Different parts of the brain linked to religious practice, spirituality, and fundamentalism

One time-honoured way to try to work out the function of different parts of the brain is to study people with brain damage. If damage in a particular area is consistently associated with a particular psychological change, well then there probably is some kind of mechanistic link.

There’s been a couple of recent studies that have shed some of this particular light onto our religious drives.

First, some background. In 2008 Brick Johnstone, a psychologist at the University of Missouri, found that patients with damage to their right parietal lobe (the bit on the side of your head above your ear) tend to report being more spiritual than patients with damage in other areas. In a new study, he’s looked at another series of 20 patients with traumatic brain injury in different parts of their brain.

In their follow-up study Johnstone and colleagues found that, as before, patients with damage to their right parietal lobe (as measured by their ability to judge the orientation of lines and ability to identify the fingers on their left hand) were more spiritual. In particular, they tended to score higher on measures of forgiveness (so they were less ‘self-oriented’) as well on measures of spiritual transcendence (tending to agree with statements like “I feel the presence of a higher power”).

In contrast, patients with damage to their frontal lobe (measured using a kind of ‘connect the letters and numbers’ puzzle) tended to be less likely to engage in private religious practices and go to church. There was also some evidence that they tended to be less spiritual.

Johnstone et al suspect that the link between the right parietal lobe and spirituality comes about because damage to this part of the brain makes it harder to locate yourself in 3D space. So there is a tendency to feel that you are somehow merged or blurred in with your environment – hence the sensations of spiritual transcendence.

They don’t speculate on the link between better frontal lobe function and religious activities per se (focussing instead on the spirituality link) but I find this result intriguing. The frontal lobe is involved in classic ‘figuring stuff out’ actions, as well as social functioning. So it seems likely that good frontal lobe function could be important to this aspect of religiosity.

The other new study was by Erik Asp and colleagues at the University of Iowa. 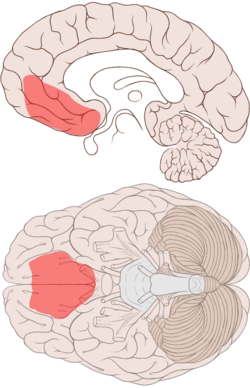 According to Asp and colleagues, the prefrontal
cortex “is critical in mediating doubt, and thus damage to the
prefrontal cortex should result in a “doubt deficit'”. This could be because such patients struggle to tag new religious notions as false, or because their memorised religious doubts were erased by their injury (or perhaps a combination of the two).

Whatever the explanation, they are careful to point out that this doesn’t mean that fundamentalists are brain damaged! Rather, this illustrates the kinds of psychology  that could link to fundamentalist beliefs.

From my perspective, I think it’s nice to contrast this result with those of the Johnstone study. Together they nicely demonstrate that not only is there no such thing as a ‘god spot’ in the brain, but that what we call ‘religion’ is in fact a mix of different psychological traits – and ones that are not necessarily linked.

July 6, 2012
Wars increasingly involve religion, but it's not a clash of civilisations
Next Post

July 15, 2012 Does education mean more or less religion? It depends on the country
Recent Comments
0 | Leave a Comment
Browse Our Archives
Follow Us!

Trump says he loves ‘the uneducated.’ He loves...
Since Donald Trump's election, a wave of anti-intellectualism has swept over America....
view all Nonreligious blogs
What Are Your Thoughts?leave a comment
Copyright 2008-2020, Patheos. All rights reserved.