Does education mean more or less religion? It depends on the country

Does education mean more or less religion? It depends on the country July 15, 2012 Epiphenom

The relationship between education, intelligence, and religion is endlessly fascinating. Previous studies have shown that nations with higher average IQ tend to be less religious, and this holds for individuals too – in a limited way. The question is, why might this be?

Gerhard Meisenberg, at Ross University Medical School in Dominica, and colleagues have conducted a new analysis of world-wide data using a novel approach.

Using data from the World Values Survey they showed that in all regions of the world except Sub-Saharan Africa, educated people tend to have lower religious beliefs. However, educated people were only less likely to go to religious services in ex-communist nations and in the Middle East, and they are actually more likely to go to religious services in English-speaking countries and in South/South-East Asia (as well as sub-Saharan Africa).

That’s pretty much what you would expect from other data. Educated people are less likely to believe, but are more motivated to fit in with social expectations. The effect is quite small, though. 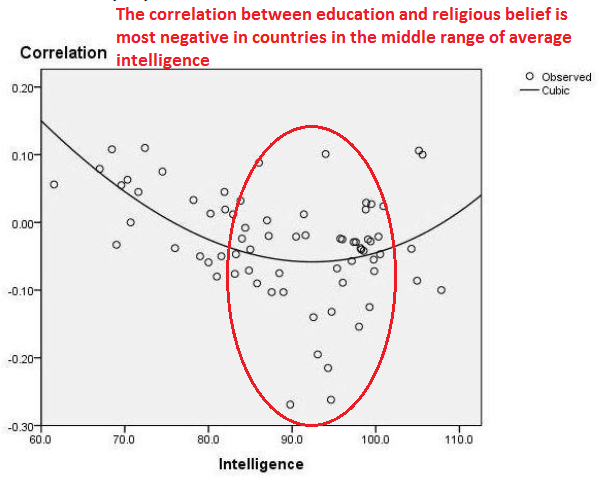 Then Meisenberg moved on to look at IQ. Now, IQ is only available as a crude estimate of average IQ in each nation, and should probably be regarded as a measure of ‘cognitive development’. Countries with a better education system, but also with better health and better access to the sort of ‘enrichment’ activities common in wealthy nations, are going to do better at the abstract problem solving that typifies IQ tests.

When Meisenberg put these average national IQs into a model, he found that they were better able to predict religious belief than either education or GDP – or a variety of other factors, such as the dominant religion and level of corruption.

Digging further, he found that, the negative relationship between education and religious beliefs is strongest in countries with moderately high average IQ (as shown in the graphic).

Meisenberg concludes that, overall, there is a “negligible relationship between intelligence and religiosity in advanced societies”.

However, when comparing between countries at different levels of economic development, “religious belief declines sharply with rising education and, especially, intelligence.

What Meisanberg thinks is that, at moderate levels of economic development, there is a ‘clash of cultures’ between scientific and religious worldviews. Religion in these countries is tha dogmatic, traditional religion that makes empirical claims about how the world works. Intelligent, educated people reject these claims.

In Sweden, the UK, Hong Kong and South Korea, educated people tend to be more religious. Meisenberg thinks that this is because religion in these countries (and other cognitively advanced countries) has evolved. In these countries religion variants have been developed that abandons claims about the real world. Instead religion is “assigned to a realm in which rational analysis is either off limits, or is applied to axioms that are not supported by observation and are, in this sense, irrational”.

In other wordS, in the most developed countries, a new form of religion has developed that appeals to educated people.

Of course, these two explanations are compatible. Perhaps the reason that the educated have hung on to religion is that they have developed sophisticated, counter-intuitive forms of religion. And the uneducated simply aren’t interested in these new-fangled kinds of religion, any more than they are interested in the old sort!

Gerhard Meisenberg, Heiner Rindermann, Hardik Patel, & Michael A. Woodley (2012). Is it smart to believe in God? The relationship of religiosity with education and intelligence Temas em Psicologia, 20 (1), 101-120

July 11, 2012
Different parts of the brain linked to religious practice, spirituality, and fundamentalism
Next Post